Average Rating : 4.31
Total Vote(s) : 16
Please rate this song between 1 star and 5 stars (5 stars being the best). Just move your mouse on the stars above and click as per your rating. Your rating will really help us to improve our website. 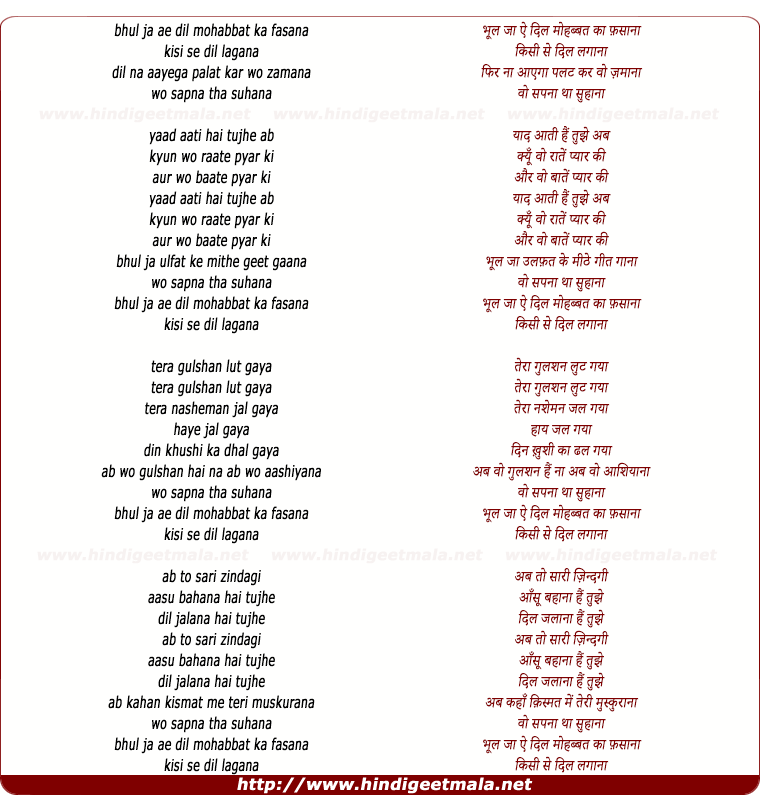 Comments on song "Bhool Ja Ae Dil Mohabbat Ka Fasana"
Ram murthi on Tuesday, July 06, 2010
This song by Lata, Sajjad combination is the best of the deo and can never
be another nuber like this ever going to be produced by anyone. Heavenly
composed with such a originality that no other Music Directors can even
immagine this song. Only Sajjad Can compose and no doubt he is proud his
USTADI as told by Naushad himself. Ram Murthi

aapindi on Sunday, July 19, 2009
i didn,t want to upload this song coz of bad quality but i still did coz i
knew people do love SAJJAD,s music.another gem that lata sang in khel was
"jaate ho to jao".she also sang an excellant song for him in rukhsana "tera
dard dil mein bsa lia" thanks for liking!

kirti kumar Khanna on Saturday, November 20, 2010
after spending 60 years in classical music as well film music i can say
there shall never be genious in music like SAJJAD HUSSAIN .. i am his great
admirer

MrMkr43 on Friday, July 12, 2013
A lasting regret is that Sajjad Sahib did not compose Music for more
films.That he composed music for only 14 films sounds unbelievable !