Video of this song from youtube
Average Rating : 4.33
Total Vote(s) : 54
Please rate this song between 1 star and 5 stars (5 stars being the best). Just move your mouse on the stars above and click as per your rating. Your rating will really help us to improve our website. 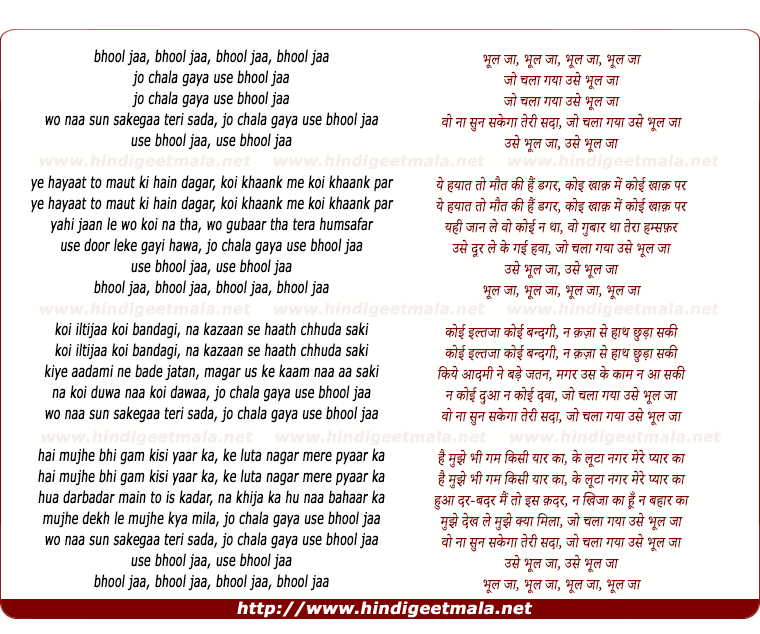 tomsharma on Friday, July 17, 2009
iltiza-pleading
bandagi-devotion
kaza-death
These two lines mean,in essence,-"No amount of pleading or any devotion could save him from death,
man tried all the tricks,but nothing came to his help,neither prayers nor and any medicine..." The poet here is talking about the inevitabilty of death..

Sukhpal Darshan on Sunday, May 17, 2009
i really love this song,, amazing,,,,great lyrics,, great composition,,,
and everything,,,, this is the reality of life i think and everybody has to
accept it in his life one day.simply great Mukesh saab,,, and one thing
more,, the peice of notes at the end is amazing , i love it especially.

hseldon47 on Wednesday, November 18, 2009
Brilliant Brillian song. great music by Naushad. Almost Un-Naushad like. The last piece of notes have been cutoff but almost "Pink Floydish" as the end. Mukesh has excelled himself. Unfortunately not very many people know of this song and was not played much on radio even in its days.
tomsharma on Wednesday, July 23, 2008
"koyi iltiza,koyi bandagi,na kaza se haath chhuda saki,
kiye aadmi ne kai jatan,magar uske kaam na aa saki,na koyi dua na koyi dawa..."
Must be one of the best lines written in Hindi film songs' history.