Video of this song from youtube
Average Rating : 4.35
Total Vote(s) : 48
Please rate this song between 1 star and 5 stars (5 stars being the best). Just move your mouse on the stars above and click as per your rating. Your rating will really help us to improve our website. 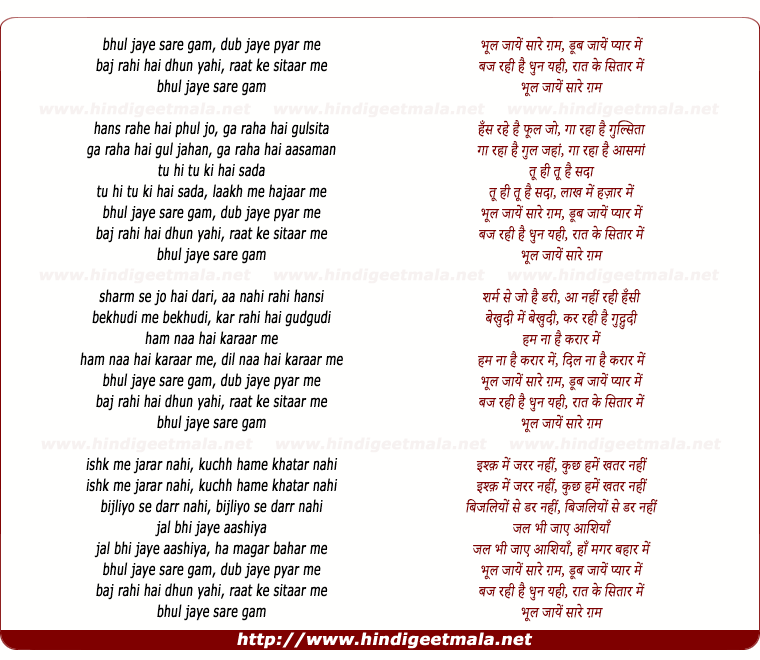 Comments on song "Bhool Jayen Sare Gham, Dub Jaaye Pyaar Me"
P Vijay on Friday, April 11, 2014
Thanks for the acknowledgement to my comment -- Good habit indeed -- I am
75 years old man -- I was wondering if you could down load, original video,
for me of a wonderful song from movie "Wafa" of 1950 - - अरमान भरा दिल टूट
गया, तक़दीर के आँसू बहते हैं - This song has one of the best lyrics that I
have so for heard - The composition is is also great by Bulo C Rani -- You
could hear audio of this song here - ARMAAN BHARA DIL TOOT GAYA. WAFA
(1950). MUKESH - LATA. ﻿

P Vijay on Sunday, May 27, 2012
During his times C. Ramchandra was one of the greatest of the music
directors who, it is said that, would come out with composition immediately
after the lyrics were given to him at the time of the actual recording and,
it is also said that, he used to at the same time come out with more than
one composition for the same song and would tell director to select one ...
That was his talent ...This song is sweetness by it self, incomparable
composition indeed to listen again and again.

Bipin R on Friday, November 23, 2012
bhul jaye sare gam.this is the words of the song...this words are right
for this song.. if you are merge in tune and voice of rafi_lata..you will
forget all this world.. You close your eyes,start to hear and merge your
self in this song..resultantant "you will forget all GAM" this is the magic
of indian clasic film song.This film song started after 1955.This song is
evergreen after 53 years.C ramchandra had given a song YE JINDGI USIKI HAI
film anarkali. . bipin Relia city Rajkot