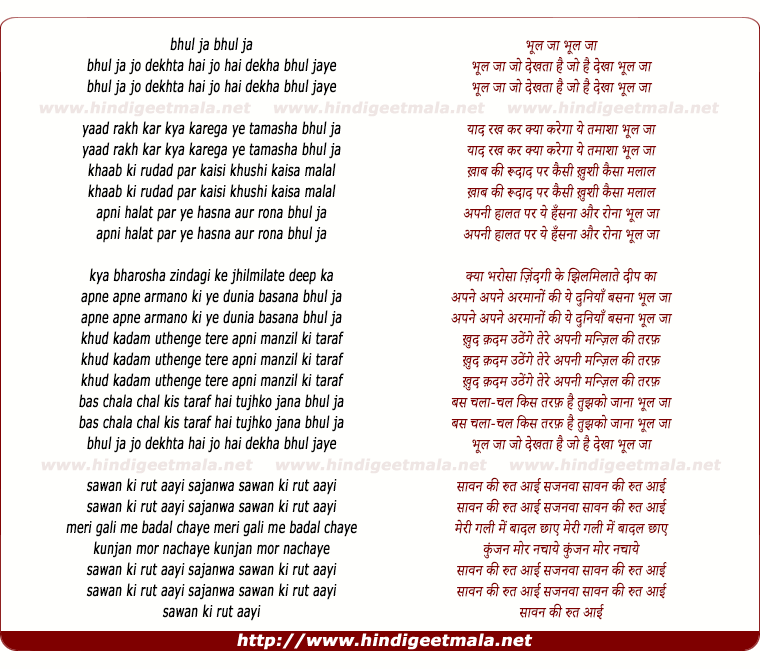 Comments on song "Bhul Jaa Jo Dekhta Hai Jo Hai Dekhta Bhul Ja"
rumahale on Monday, June 25, 2012
Lyrics by Dr Safdar 'Aah' Another beautiful song and excellent scene with
SurendraNath and Baby Madhuri on screen. SurendraNath has sung beautifully
as always. But at the end Baby Madhuri emulates stanza from another
beautiful song, that you have posted already - "saawan ke rut bhaye
sajanwa". It is here again debatable regarding the real singer. Thank you
for the excellent presentation.

rumahale on Monday, June 25, 2012
Absolutely. He also produced and directed the movie Bhookh (1946). In
India, it is really unfortunate that most of the documents and chronicles
are not maintained. Now, after invention of internet attempts are made -
but here too, I confess, sincerity is wanting. No hope for improvement.
Regards.

BharatGul on Monday, June 25, 2012
It's so charming how, in a role reversal, the little girl here comforts an adult by caressing his head in her lap.( Recall Daisy Irani wiping Raj Kapoor's frightened face with her little hand in Jagte Raho). Surendra consciously modeled his singing style after KLS, though the sweetness of his voice was his own innate asset. Nice upload. Thanks, COS.
crazyoldsongs on Monday, June 25, 2012
that was a really nice scene you have remembered from jaagte raho for
comparison ! surendranath's singing did remind me of k l sehgal too ! never
new about these songs before . da, i think you will like the next song
''aurat ek kahani bhaiyya '' also . thanks for the nice comment . !

Colonel Rao on Thursday, July 26, 2012
Great song by immortal surendranathji. He gave us many memorable hits in
his long career of acting and singing. He kept Saigal tradition up to the
last.Present generation hardly knows about him and are lost in cacophony
called Music.