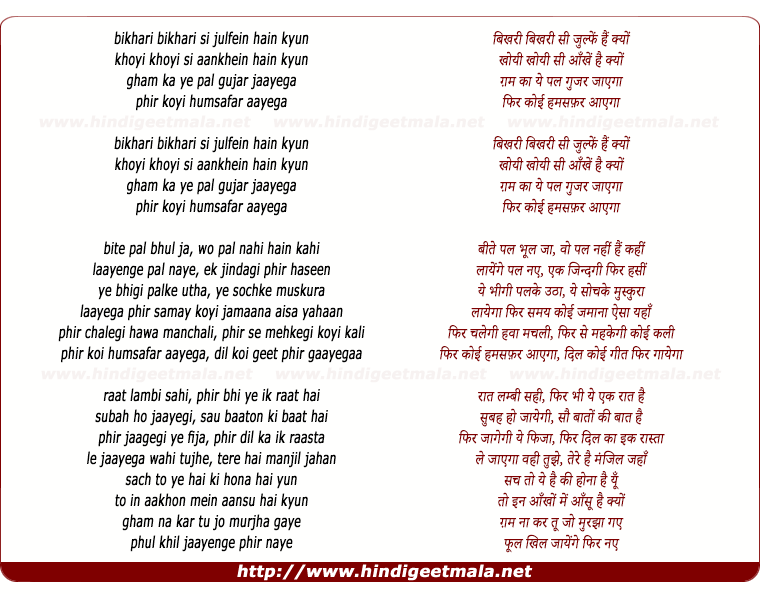 Comments on song "Bikhari Bikhari Si Julfe Hai Kyu"
apexdna on Tuesday, February 28, 2012
@kajol511 It might have sent the wrong message to the viewers as India is
very conscious about things like that...I am not sure of your opinion on
the subject matter, but I think it can be a good thing as Westerners are
known for the highest divorce rates, and Indian (or so it seems) i.e.
cultural high value for marriage and love is what's missing in our modern
society, no matter how you look at it. Point is, if you can both stick it
out until the end, even a prearranged marriage can work then.

look0010 on Monday, February 07, 2011
@tropicanahana I am a cancer I am not shy( I guess my Punjabi nature overshines my shyness :P). I don't watch hindi movies much but I watched this due to a friend and because of Priyanka Chopra, All the girls looked the same because of course it was Priyanka Chopra playing many roles lol. But I think she looked the hottest playing Hansa
crescenthero on Wednesday, January 16, 2013
She is honest. She said something that put her above the rest of the
options. The truth. Most girls would hide it and pretend to live theirs
lives putting it out of thought, but she was beautiful and amazing. Virgin
or not, she earned the right to be viewed as an angel. Heartbeat, I would
take her.


Shivy Verma on Monday, December 08, 2014
Hero can t be with this girl but does not want to hurt her but he endues
her and she is strong enough to take this and look at this positive and
prove she is not less than a Heroine with the person inside her.uh am
tired but well ya ...this is wat this song is about﻿

Sara S on Sunday, April 22, 2012
not a huge fan of this couple but there is just so much chemistry between
harman and priyanka in this scene. I found it funny that this song was used
for cancer because cancer's tend to like sad songs and anything else sad
like movies books. or atleast for me :P