Average Rating : 3.57
Total Vote(s) : 7
Please rate this song between 1 star and 5 stars (5 stars being the best). Just move your mouse on the stars above and click as per your rating. Your rating will really help us to improve our website. 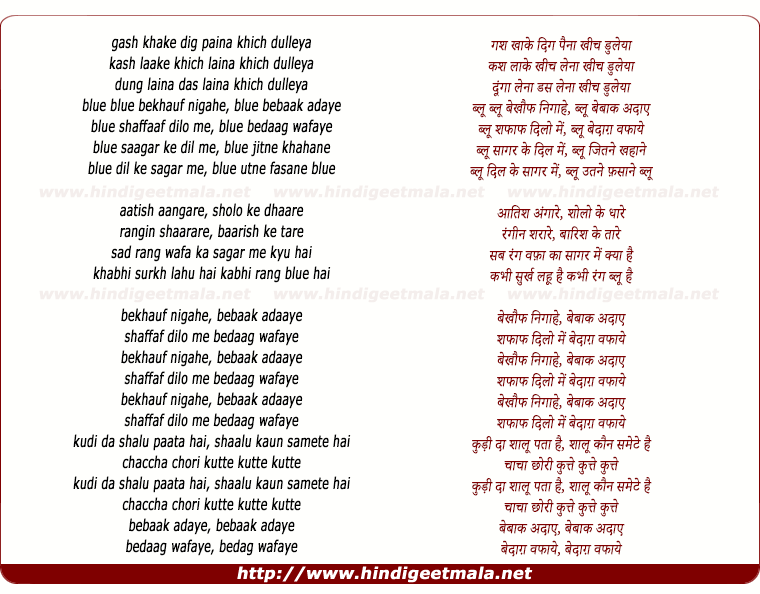 Comments on song "Blue Blue Bekhauf nigaahe"
TheNealnikhil on Tuesday, November 17, 2009
erm...diz song wasnt by AR.rahman...this Blue theme was made by Blaaze, Raqeeb Alam, Sonu Kakkar, Jaspreet Singh, Neha Kakkar and Dilshad Khan,A. R. Rahman composed the music of and lyrics were written by Mayur Puri, Abbas Tyrewala, Rajat Arora and Sukhwinder Singh where Kylie Minogue sang one of the songs ("Chiggy Wiggy")[1] along with Sonu Nigam and Suzanne D'Mello. Mukhtar Sahota, a UK based music producer composed the Punjabi rap music, lyrics and vocals for the background score.
ketmod on Sunday, October 11, 2009
theres a bit in this movie where lara dutta tries to do a jessica aba into the blue type thing, no offense, she's very beautiful but only jessica alba can pull that off :D
neerajcorps on Thursday, September 02, 2010
akshay kumar proves y he is called as a king of bollywood...
akki u r the best

777subi on Saturday, September 26, 2009
the 1 who spoke negative ,for them i can say that they do not have the taste .this film is gonna b a gr8 blockbuster and if not atleast 1 should think how much hard work the actors did .think 2ice before u preech
Anay Badavne on Saturday, June 18, 2011
agree with u that all worked hard, the movie was beautiful but its always the script,with which the audience judge the movie...
not all hard working people are successful :)