Video of this song from youtube
Average Rating : 4.35
Total Vote(s) : 156
Please rate this song between 1 star and 5 stars (5 stars being the best). Just move your mouse on the stars above and click as per your rating. Your rating will really help us to improve our website. 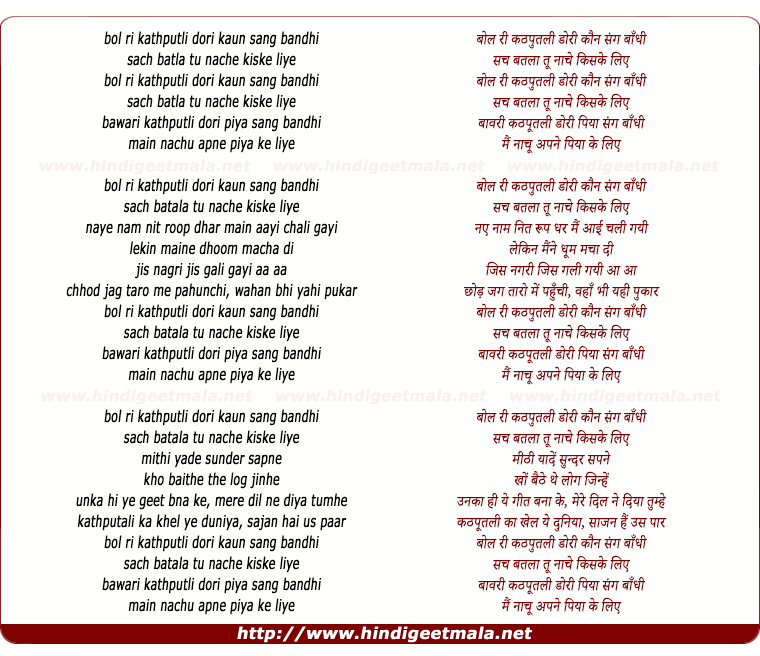 Comments on song "Bol Ri Kathputli Dori Kaun Sang Bandhi (Sad Version)"
orientlover1 on Monday, May 30, 2011
Padmini was a good dancer but not so good as actress. She spoke with accent and quite bland in her facial expressions. Vyjayanthimala was more beautiful and better in dancing and was excellent actress as well. In facial resemblance B. Saroja Devi was closer to V. Mala than Padmini.
RealMusicKing on Monday, August 23, 2010
Sad version of the song. Very nice. Thank you for the upload.

tony frank De' S on Wednesday, July 27, 2011
@bharath1957 Saroja Devi only took her acting seriously towards the near
end of her career. Initially she was just a glam doll in most of the MGR
movies, although almost all of her movies had memorable songs..she did good
in Pazhum Pazhamum though..towards the end of 1968 she acted in K.
Balanchander's Thamarai Nenjam in a solid role and went on to act in other
good movies like Kuzha Villaku and so forth..but that was the near end of
her career. she quit acting in 1972 post Pathu Masam Bandam

tony frank De' S on Wednesday, July 27, 2011
Lets not forget the Sayee Subbulakshmi sisters as well. Watch aplam chaplam
and some others on yt and you will know what i mean. Padmini was more sharp
in her dance moves, while Vjyanti was more graceful and agile..Both were
good as can be seen in the one all time dance competiton between the 2 in
Vanjikottai Valiban. But i must say that Vyjaynti had excellent facial
expressions when dancing and that was one of the reasons she scored over
the rest of them..but Kumari Kamala was still No. 1..

Voltairec on Friday, May 21, 2010
OMG- I am just transported into another world watching this gem of gems.
Vyjayanthimala is like a bird in full flight..absolutely natural,
fantastic, ethereal dancing.if there's a better dancer I am yet to see!
Watch her in Naya Daur(ude jab jab) and we know we are witnessing a sublime
art. Lata didi brings all emotions to the fore with that golden/fresh voice
of hers in 50's.the music, singing, dancing all make us feel that we are
rushing to a climax like a brook becoming torrent!