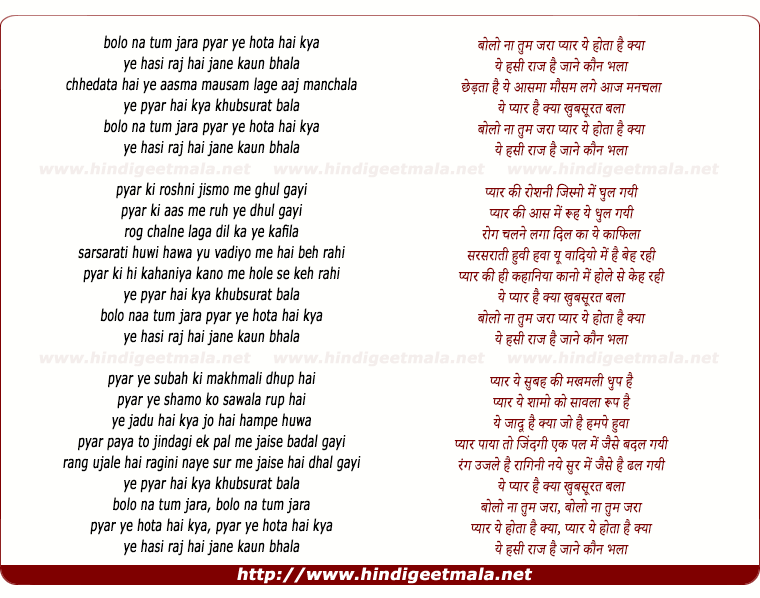 Comments on song "Bolo Na Tum Jara, Pyar Ye Hota Hai Kya"
arpitkh2005 on Thursday, February 12, 2009
dude, i guess u skipped d description of d song...this song is from a bollywood flick "Fight Club" n it has been filmed on 1 of d actors of d group named Fight Club n d actress is d sister of another grp member..its a bit on d side-track from d topic of d film but its a nice song.isn't it?
kaRanRoyaLjaNissaRy on Tuesday, August 10, 2010
@rahulme2,

Most of the modern Bollywood songs are copied from somewhere .. !

wahaby2k on Sunday, March 11, 2012
ENGLISH TRANSLATION#1:-The boy's words are sweet;The boy's habits, however, are bad;The boy's eyes are drunken;in them is also an intoxication;this heart says.your arms are fair;when I look into them slyly;your colour is also fair;Boy, you are also young/youthful (prime- young man);Now what distances? and what helplessless?;in your hands;are all of my decisions (you make my decisions now);
angelfallen90 on Friday, April 08, 2011
if someone remembers this song most :) it's me. after around 2 years i always listen to this song. it's because of this person that i will never forget. he said "lenny this song is for you" :).. i don't know what is happening to you right now and what will happen to you in the future, but I do hope i meet you in person Arpit..
Dewan Gazi on Saturday, August 27, 2011
I must say thats a gud definition or expression of love...I wondered 4 many years what would be a proper n appropriate way we express our love?? do we think b4 confessing our love?? if we do wats da thinking process?? how do we think?? is it spontaneous thinking or we think more like rationally????
View all 135 comments related to song Bolo Na Tum Jara, Pyar Ye Hota Hai Kya
Popular Links on HindiGeetMala