Video of this song from youtube
Average Rating : 3.91
Total Vote(s) : 196
Please rate this song between 1 star and 5 stars (5 stars being the best). Just move your mouse on the stars above and click as per your rating. Your rating will really help us to improve our website. 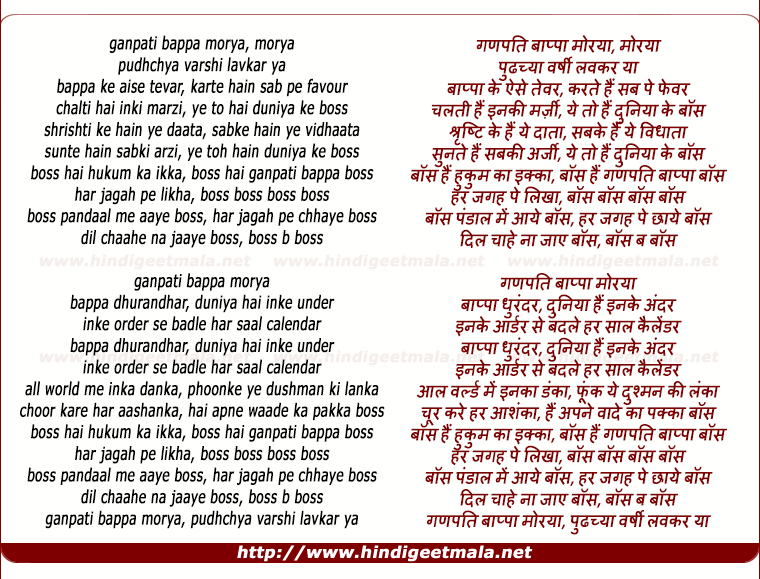 Comments on song "Boss (Ganpati Mix)"
cre8ive92 on Wednesday, September 11, 2013
Clearly your knowlege about this entire religion is based on what people
have fed you, and you have not looked into what this religion stands for. I
do see you are confused about so many avtars of our prime God, I suggest
you think about it this way. Is the electricity in your microwave, phone,
Tv, ipod, radio, bulb etc different? no, these instruments use that SAME
electrical energy but different form depending on utility. with the same
reasoning we have diff FORMS of the 1 supreme power.

neelscooldude1 on Thursday, September 12, 2013
Dude, didnt humans create the internet and use it? Didnt we create a mobile
phone and use it? Whats the point of creation if u keep it isolated from
yourself and never get involved directly with it? Dont stereotype god's
personality or even claim to know that. If god exists, he obviously can do
whatever he wants. He wouldnt create a mountain and then struggle to come
on top of it because it burns. I am sure he is capable of appearing
anywhere he wants if he is truly god

neelscooldude1 on Friday, September 13, 2013
What makes u think that god (if exists) is a lonely being and why did he
even create the universe? Did he have nothing better to do? Moreover, if he
takes a human form, why cant he have a wife? How could he be incapable of
appearing on a mountain? Does he misjudge his own power or just wanted to
show off? You are trying to claim to know the personality of god and even
judging him by the microscope of human morality. Belief truly knows no logic

mohammed ayaz on Saturday, September 14, 2013
All the religions spread peace,Harmony,Humanity etc & No religion asked you
to shed human blood,this is act of beasts.I really feel sorry,Humiliated &
ashamed when I saw people of my country who are my brothers gets fooled
very quickly on the name of religion & community & they don't come forward
to fight for basic needs like pure water,food
,electricity,hygiene,education,free roads,rapid transport etc.

mohammed ayaz on Saturday, September 14, 2013
my dear friend, this a secular country & our constitution allows each N
every person to follow religion of his own choice but degrading or
insulting other religions are prohibited.We have to respect other religions
as it has been defined & asked in every religion.The great people of all
religions are still respected ,worshiped because of their humane attitude &
service they did for society.