Video of this song from youtube
Average Rating : 4.59
Total Vote(s) : 80
Please rate this song between 1 star and 5 stars (5 stars being the best). Just move your mouse on the stars above and click as per your rating. Your rating will really help us to improve our website. 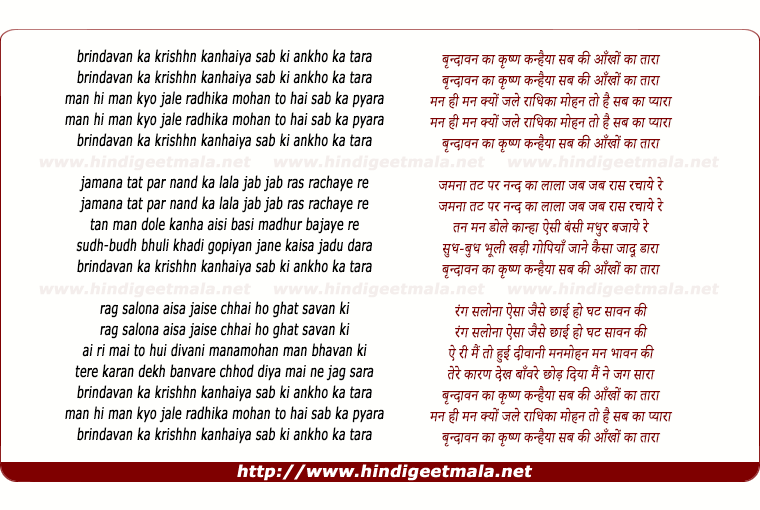 R Nanjappa on Monday, June 09, 2014
The Tami/Telugu versions came first. Sri S.Rajeswar Rao scored music.
The songs were based on classical ragas and were hugely popular. It was
remade in Hindi after about two years, with Hemant Kumar scoring music. His
music is also excellent and original. But under pressure from the producer,
he had to retain this one tune from the original version, But he has
slightly changed the background score.
I am familiar with the Tamil version. The lyrics by Rajinder Krishan are
superb and absolutely poetical. This one is not just a film song, it can
stand as a Bhajan How great were our old masters! I salute them all!﻿

R Nanjappa on Sunday, October 27, 2013
This is a wonderful song. The tune was originally composed by S.Rajeswar
Rao for the Tamil and Telugu versions .I think Hemant Kumar was pressed by
the producer to retain the tune for the Hindi remake as it had become a
huge hit in the South, but the orchestration is slightly different. The
Tamil song by A.M.Rajah and P.Leela is also sweet. But the Hindi lyrics by
Rajinder Krishan are real poetry and superb, head and shoulders above the
Tamil one by Tanjai Ramayyadas, though I mean no offence.

Mani Menon on Monday, April 08, 2013
The original movie was in Telugu. It was later made as 'Missiamma' in Tamil
and subsequently 'Miss Mary' in Hindi. It was a hit in all three languages.
What a treat to watch Meena Kumari in a light humorous role! Gemini Ganesan
was a perfect foil. By the way, for this particular song, Hemantda's job
was pretty easy! The tune is the same as the original one! The Tamil song
was, "Brindavanamum Nandakumaran..." set to music by Rajeshwar Rao.

ShivKumar44 on Wednesday, February 22, 2012
@Mahagedara2:Only a few words about this movie: This movie is the Shadow
version of Rabindra Nath Tagore's drama"MANMOYEE GIRLS SCHOOL". SO is the
movie DHOLAK. Some adding and removing been done by the Director/writer. I
have this movie in my collection but very much impossible to collect
Tagore's MANMOYEE GIRL'S SCHOOL. I also saw the Tamil version almost
same.Bottom line Original idea from Tagore's. Thanks for uploading.