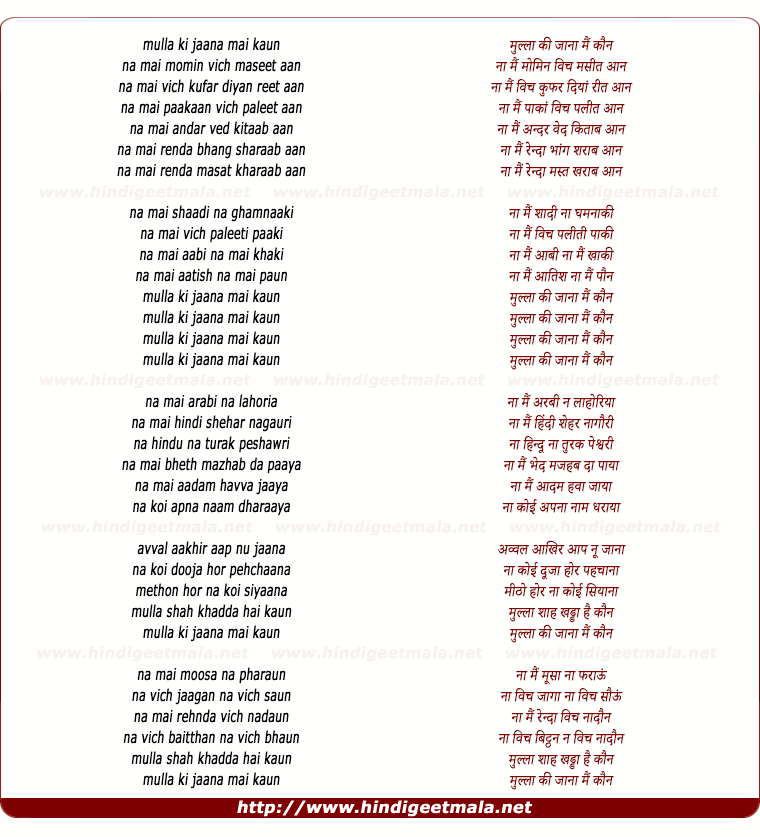 Comments on song "Bulla Ki Jaana Mai Kaun"
Mo00nlight on Sunday, March 13, 2011
Baba Bulleh Shah was a sufi saint from Punjab who left all worldly pursuits
in search of truth.He wanted to discover the mystery of﻿ his own
existance.He wanted to know his own real identity.One by one he denies what
he is not.He is anguish in discovering and solving the secret of
"self".However inthe end he affirms that he knows none other than God who
was the First and will be the Last.This affirmation contains the truth of
his own identity he was and has been "one" with "The Truth"(or God).

avalanche16 on Monday, July 02, 2012
Well I agree that USA should not have started War with Iraq. It was because
of oil and republican president (bush). USA people didn't have a choice to
voice their opinions because Bush went for war without asking anyone. Obama
on the other hand is democratic and good, so him killing Osama is true. How
do you expect the USA to sit still when a terrorist attack like 9/11
happens? Ofcourse they will go into the middle east and create war. Plus it
was a good thing Saddam was killed. He was bad.

Judit Schonwald on Tuesday, January 27, 2015
Since I do not know neither Urdu nor Hindi, I had to rely on the English
translation. This poem, describes men's everlasting quest to discover his
place in the world. By saying he is neither this or that, compares himself
to something that transcend humanity. Identity is either created by us or
created for us. The world needs a lot more understanding of others than
division among us. I truly believe, that music and poetry are the
instruments through which peace can be reached. ﻿

Mo00nlight on Friday, October 07, 2011
@kanthasingh54 I don't believe this verse Makey gaya gal nahi mukdee,
pawein soo-soo jumaa parhh aiiee criticizes Islam in particular. The second
phrase as follows "ganga gaya gal mukdee nahi pawain soo soo ghotay khaye".
If u see this verse in depth then it is criticizing every religion. It's
because people don't understand the inner essence of a religion and stress
more in performing religious rituals without understanding what religion is
about.