Video of this song from youtube
Average Rating : 4.35
Total Vote(s) : 17
Please rate this song between 1 star and 5 stars (5 stars being the best). Just move your mouse on the stars above and click as per your rating. Your rating will really help us to improve our website. 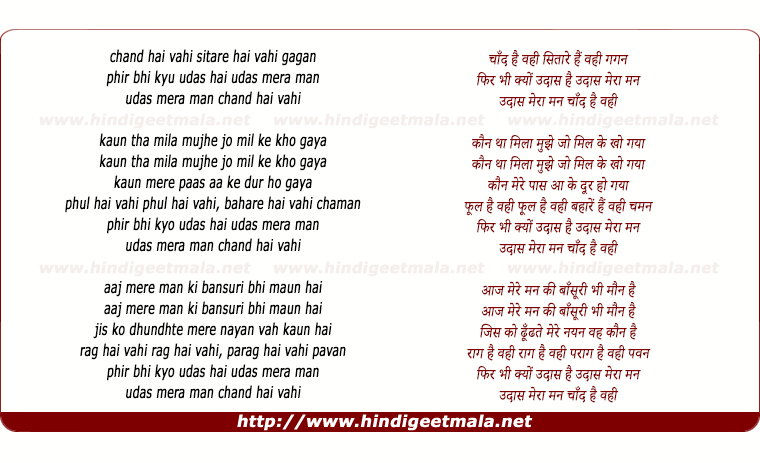 Comments on song "Chaand Hai Wahi, Udas Mera Man"
crazyoldsongs on Saturday, March 26, 2011
an awesome composition sung with so much sweet pathos by geeta dutt , that
it brings tears to my eyes ! the lyrics by bharat vyas pull at one's heart
strings and are so melodiously adorned by geeta dutt's pathos filled voice
that this makes it one of her best songs apart from ''kaise koi jiye ''! an
absolute indescribably beautiful haunting melody ! and its also so gracious
of you to refer oldHFMfan channel to your viewers , for more of geeta
dutt's songs ! thanks once again !

Parag Sankla on Saturday, March 12, 2011
An absolutely wonderful, melodious and sweet song. Many thanks for sharing
this divine song filmed on Meena Kumari but deleted from the film. The
lyrics by the great Bharat Vyas ji and composed by the great
singer-composer Arun Kumar Mukherjee. Many thanks Ajay ji for sharing this
lovely song with all the music lovers.

V. Siddhartha on Sunday, August 09, 2009
There were in reality two enchantresses in this movie: Geeta Dutt and Meena
Kumari. The sweetness of GD's song and the beauty and realism of Meena's
acting struck me as tailor-made for each other. One let honey flow through
her voice, the other through her facial expressions. Thanks for the post.

Partha Sur on Friday, October 01, 2010
Ashok Kumar and Meena Kumari were a great pair - two "natural" acting
styles working together! What a great Parineeta - much better than the
recent Saif Ali Khan and Vidya Balan remake. It is like trying to re-make
"Shree 420" !

Kay Cee on Thursday, December 24, 2009
Impressive combination, Geeta Dutt and a young Meena Kumari! Both believers
of shooting from the hip: one employing honey layered voice and the other
killer facial expressions. Terrific piece of entertainment.