Average Rating : 3.95
Total Vote(s) : 311
Please rate this song between 1 star and 5 stars (5 stars being the best). Just move your mouse on the stars above and click as per your rating. Your rating will really help us to improve our website. 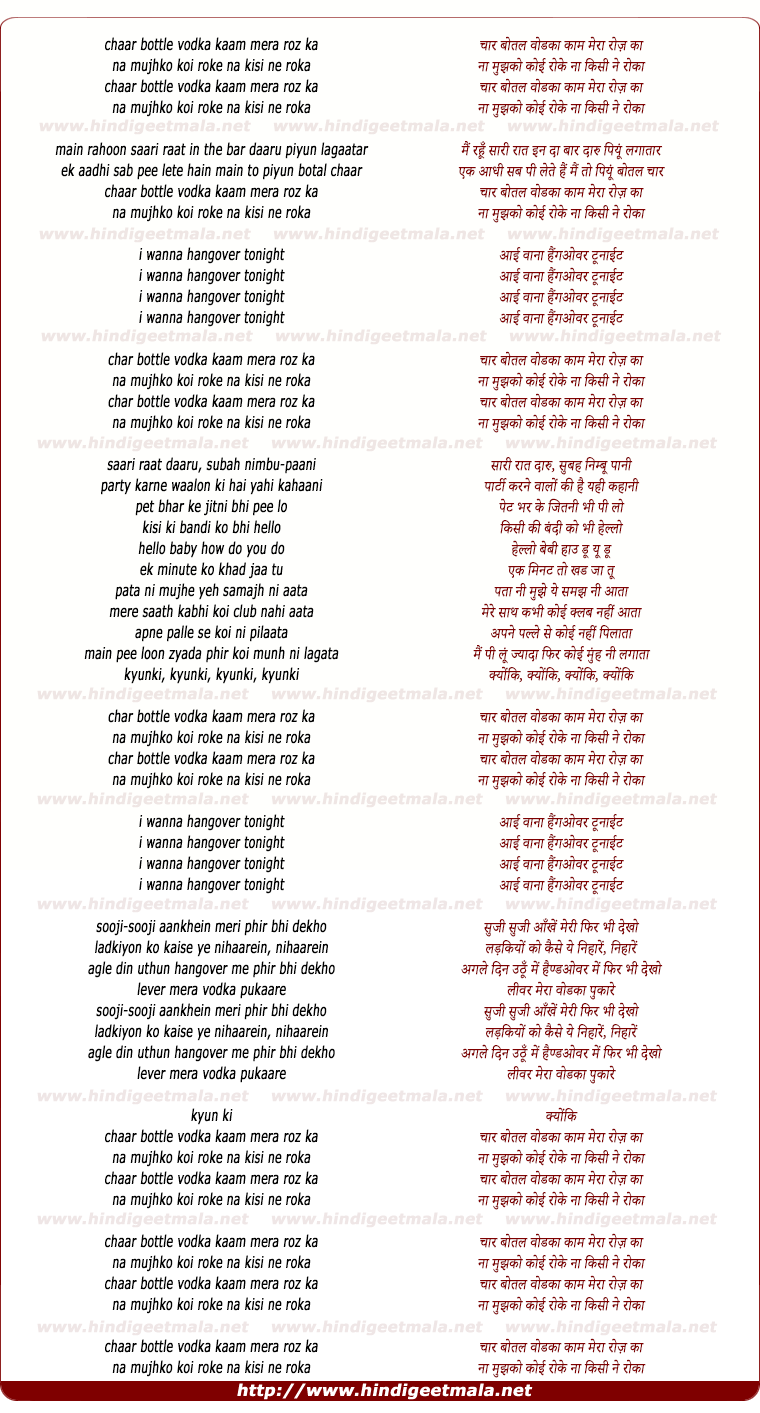 Comments on song "Chaar Botal Vodka Kaam Mera Roz Ka"
avinashkapoor011 on Wednesday, July 16, 2014
I agree to some of the critics of this song, and I personally think that
this might not be the best kind of music but it definitely IS a type of
music, and music has no specific definition and for sure does not have a
specific set of rules which define whether it can be liked or not. Every
kind of music is there in the world and is hence liked by the fans of that
kind of music. So please lets like our taste of music and not degrade an
artist. (Yes I called him an artist, because he created something unique
viz. his kind of music) !!﻿

Joshua Thomas on Friday, August 08, 2014
And people from other countries tryna say his english is funny nd all that
...he aint even coming to your industries to rap or perform..he is working
in bollywood industry nd he has all the right to do that as he is an
indian.and you people from ither countries has no right to criticise his
talent or songs becz half of you lot dont even understand the meanings of
his songs ﻿

arjshopping. com on Monday, February 09, 2015
Music is good, but i am more concerned about the Illuminati symbols in his
music videos this day...yo yo honey singh is a true super star and rockstar
he only produced hits like this one other blue eyes char botttle vodka
sunny sunny issey kehte hip hop and desi kalakaar he is one true superstar
the best singer around in india i am a super fan of him﻿

Gamer GenX on Sunday, December 21, 2014
what does honey singh want to prove that he is hip hop well he is a fake
ass wannabee. he has no idea what hip-hop is. i mean how can the indian's
tolerate him.?? i am from the west coast and i completely sense that honey
singh is a fraud. if you people want the mixture of west coast and hindi
music why dont you listne to Bohemia??? ﻿

Shaheen Nawaz on Monday, January 26, 2015
I like hindi songs regarding alcohol. Char bottle vodka kam tere rozka
doesn't mean an alcoholic person. It's mean a person who sell 4 empty
bottles of vodka and earns money. Next time there will be song like 6
bottles rum 8 bottles whiskey etc. Anyway I like the song. Love u ho ho
honey singh and the garam masala sunny leone.﻿