Average Rating : 4.17
Total Vote(s) : 499
Please rate this song between 1 star and 5 stars (5 stars being the best). Just move your mouse on the stars above and click as per your rating. Your rating will really help us to improve our website. 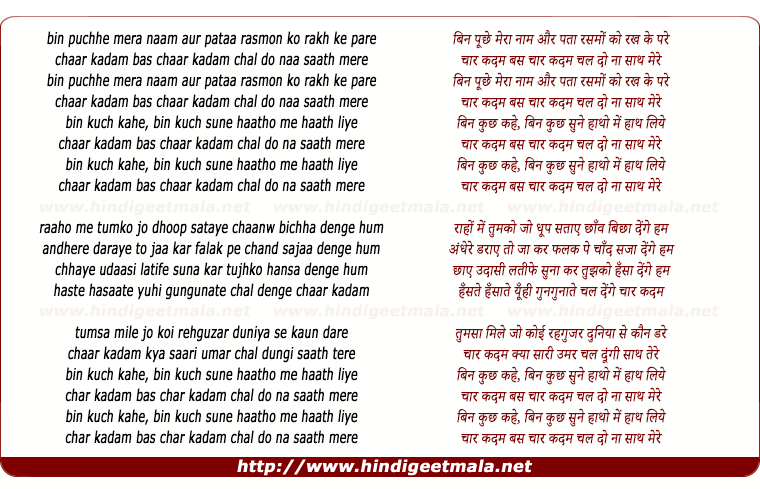 Comments on song "Chaar Kadam"
Ranman on Monday, December 22, 2014
Saw PK this weekend!What a great movie!!!All actors including the favourite
Salman and SRK needs to learn from Aamir..he is always willing to take risk
and give some message to our society!Keep making us feel special to be
human AK and RKH!You guys understand what it is to be human and to
feel!Keep rocking!!!!﻿

Samrat Dutta on Sunday, November 23, 2014
the song is pretty good..
And the chemistry between anushka and sushant is also great :)

Maybe, anushka needed such looks for this movie, but I personally didnt
like the wig, and that horrible lipjob (p.s.:- it didnt add any point on
cuteness quotient at all) -_-﻿

nirmen kadour on Sunday, November 23, 2014
I love everything about this song ( including very beautiful picturisation
and fresh and young pair) except Anushka's wig they do more movies . the
song is beautiful and I can't stop listening it.﻿

my music my songs on Sunday, November 23, 2014
YO YO time is over.. Melody is back again.. Thanx to producers of the movie
& T-Series for bringing mesmerizing voice like Shaan once again in the
loop.Really liked it..﻿