Video of this song from youtube
Average Rating : 3.76
Total Vote(s) : 25
Please rate this song between 1 star and 5 stars (5 stars being the best). Just move your mouse on the stars above and click as per your rating. Your rating will really help us to improve our website. 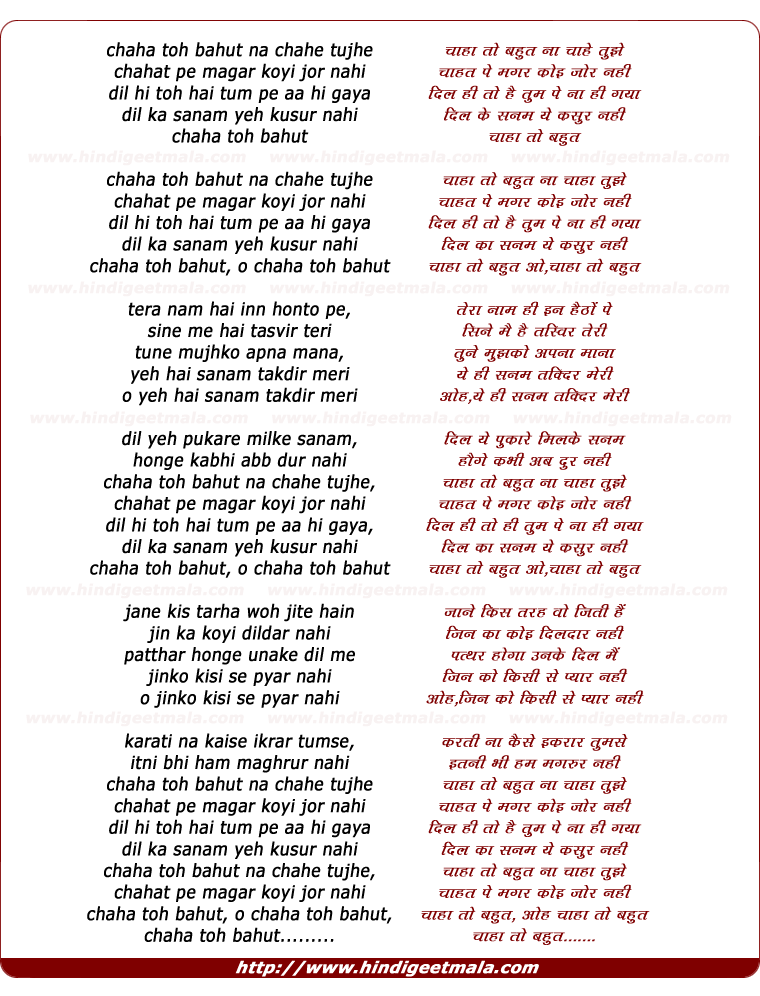 Comments on song "Chaha To Bahut Na Chahe Tujhe"
M Y on Saturday, October 04, 2008
thanx dear brother for supporitng my comments.i think not only we both, but
a lot of people that grew up in 90's and that have a deep feelings for
melodious songs, will deffenitly love the melodious songs from 90's.i
really feel so sad when i listen to modern indian music,its just a pure
crap and a feels a burdon in mind,while 90's, songs,ohhhh, so nice n
sweet.they are still fresh as ever.love 90's, love k.sanu, alka, udit and
off course the masters of melodies, Nadeem-Shravan. Yaseen,Beijing.

hipeman7 on Wednesday, October 27, 2010
its been one of my most most favourite songs since it was sung...can't get enough of it every time i listen to it..its like addictive as...thanx to singers, composers and lyricist and every one involved in this awsome creation
TheSoni83 on Friday, August 21, 2009
this song is romantic as hell!!! i love it... movie i thought was okay but
the songs were fab!!!! raveena in her glory days!! saif was okay as well
but his voice annoys me and he looks like a girl sometimes !!!

speedygonzaliz767 on Sunday, October 26, 2008
I really miss 90s. what a romantic era. I do love the latest songs but
somehow the romance and melody is missing from the latest offerings. which
is really sad :(