Video of this song from youtube
Average Rating : 4.20
Total Vote(s) : 41
Please rate this song between 1 star and 5 stars (5 stars being the best). Just move your mouse on the stars above and click as per your rating. Your rating will really help us to improve our website. 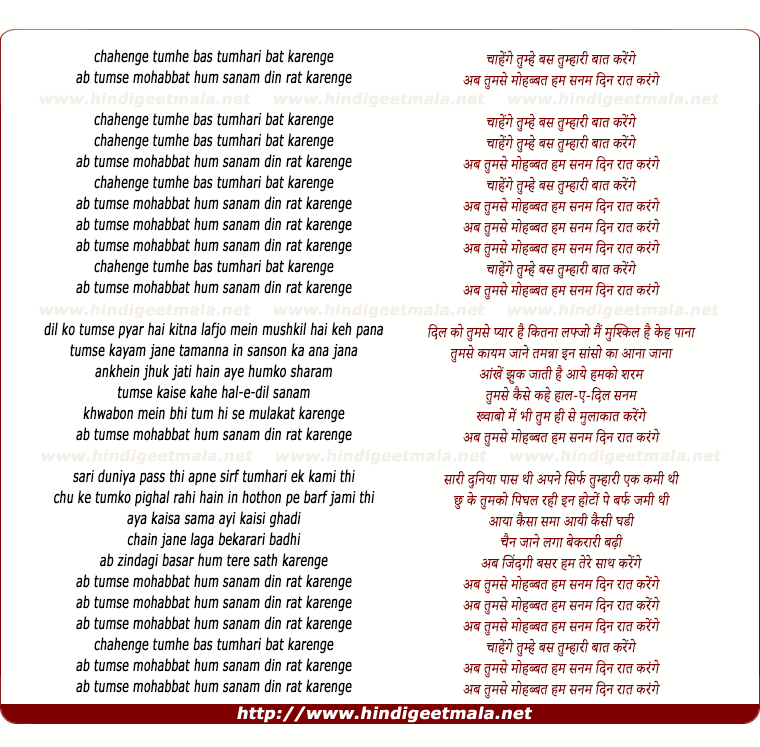 Comments on song "Chahenge Tumhe Bas Tumhari Baat Karenge"
xielhoszah on Monday, October 18, 2010
Some years ago, two parents went out for dinner. Some hours later the babysitter was calling to ask if she could cover the clown statue in the nursery, the father said, "Take the kids, we'll call the police because we have no clown statue." The "clown statue" is really a killer that escaped from jail. If you do not post this letter on 10 songs tonight, you'll see the clown in your bed at 3:00 am with a chainsaw in his hand
Jyoti Saharan on Thursday, September 29, 2011
May shahid and amrita come together for forever.gjb ki jodi
hai!..just awesome...song------------wah!kya
baat!kya baat!kya baat! amazing..bt shahid and amrita plz come together plz
wanna see u soon

16sohaib on Tuesday, November 15, 2011
no matter what happens in this world...i hope one thing happens..shahid and
amrita get married, have lots of children, and they make a lot of movies
together :D

btrjamesmaslow11 on Sunday, June 03, 2012
I love them together!! I love Shahid soo much and i wish they would make
another movie together <3 Why arent they!?!? Anyway, really nice video:)

Crack Attack on Saturday, April 20, 2013
Hi am divya Barti I am born again whovever other birth killed me I WILlL
KiILL HIM my naming is crack attack 925 my scary soul will kill him