Video of this song from youtube
Average Rating : 4.41
Total Vote(s) : 103
Please rate this song between 1 star and 5 stars (5 stars being the best). Just move your mouse on the stars above and click as per your rating. Your rating will really help us to improve our website. 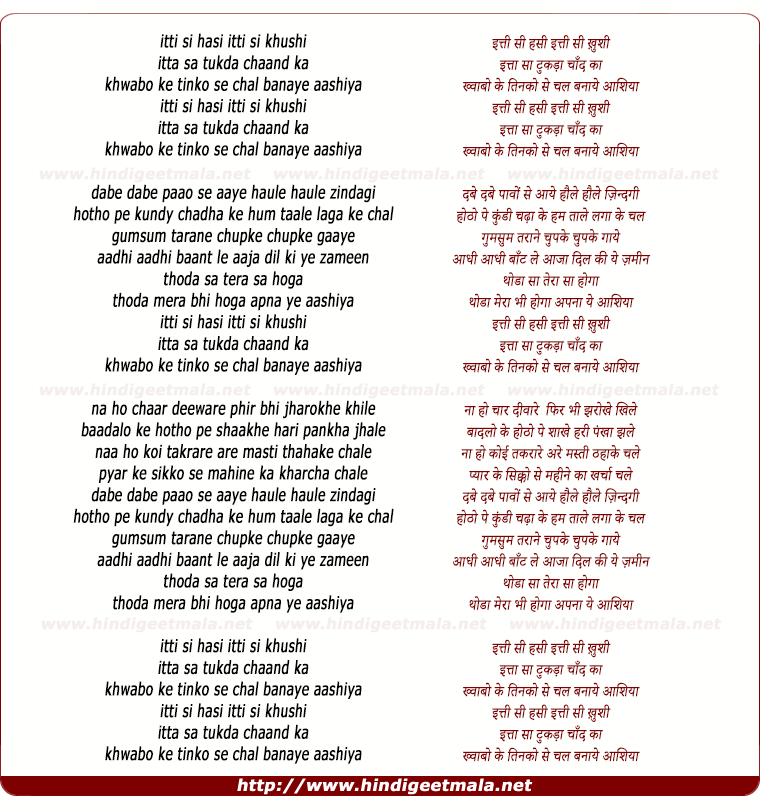 Comments on song "Chal Banaye Aashiyaa (Solo)"
JoJo hill on Tuesday, March 05, 2013
I asked my family to watch this movie...they don't speak/understand much
Hindi but have watched a few Bollywood movies. After the movie was
finished, my husband and my son both turned to me and asked who is that
actress (not the actor or anything else)? I told them don't you recognize
her..she's the same one from Dostana..they both said
unanimously...'that's amazing, she did an incredible job, you would never
know it was even the same person'..so to me that says it all!

subash pradhan on Tuesday, September 18, 2012
Beautiful track,...amazing work...but I dont understand why credits are
never given, in our Film Songs , to the core Music Arrangers / Live
musicians and others who are involved in making the Music. The track sounds
different n amazing bcoz of the different arrangement style and the way the
live musicians have played. Melody is nothing new..but over all it
sounds great because of the Music Production. Give Credit to the people who
have worked hard !

JoJo hill on Monday, October 01, 2012
Lol! You know it's funny that u say that..when I watched "Notebook",years
ago, I remember one thing after the fact..I turned to my husband n said
"why do I feel like I have just watched a Hindi moive"...N the response I
got back was 'Yeah me too'...so, I don't know why I felt that way but I
did.I haven't watched Amelie but have watched the others n some scenes, yes
have been used but nonetheless,I enjoyed it wholeheartedly.

Drishty Ra on Wednesday, September 26, 2012
Thats cuz Indians dont have originality. Like in this movie, i was very
disappointed, The claim that you made "indians show love better" lol for
your info all its love scenes has been precisely copied from Notebook and
Amelie and Mr.Bean's for its comedy.see zero creativity from indian
directors... Watch "Notebook" that movie shows you what true love really
is:) .. but the songs are amazing in this movie :)

Virulent Valyrian on Saturday, October 06, 2012
Indians are good at over dramatizing love. And in a country with population
of over billion, there is a high chance of acceptance due to lack of
ideology difference or programmed ideology of the public. The common
public's life busy and hectic that these 3 hours are enough to satisfy
their need to escape from reality. The country's economy is evolving but
there cinema is still cheesy and stagnant.