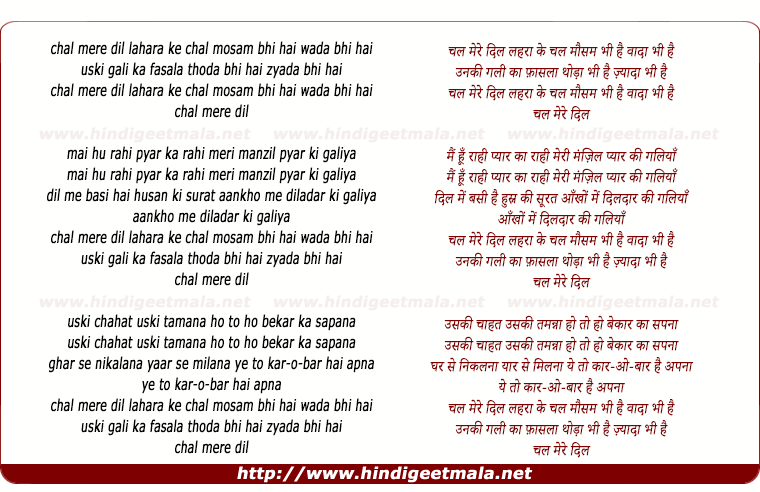 Comments on song "Chal Mere Dil Lahra Ke Chal"
tyagnesh on Monday, October 19, 2009
I like this bicycle song. Mukesh's voice is so simple and still so great. Another song by Mukesh for Mehmood - Pyase Panchhi is equally good. It reminds me of the days when I used to ride bicycle in India during school and college days. Hindi movie actors portrayed everyday life of 1950s and 1960s in those songs. It was a great joy to ride a bicycle on Indian roads then with less cars in those days. Another song is by Kishore Kumar filmed on Dev Anand - Mana Janab ne. Thanks for the memory.
MrShakeb123 on Monday, May 17, 2010
There is nothing like Mukesh and his breath taking voice.Mukesh is marvellous,
Mukesh is magnificent, Mukesh is melodious, Mukesh is mellow ,Mukesh is the
jewel in the crown of music , Mukesh is the heart and soul of the music,
Mukesh is the back bone of the music,Mukesh is the life and spirit of the music
Mukesh,Rafi and Talat they are all invincible in the field of music they are equally
best and second to none. Thanks pal for this jewel.

Pradeep Sharma on Saturday, March 16, 2013
Never Heard This Extra Stanza Narendra Ji ... Have You Ever Listen This
Stanza Or Just Read In Lyrics ???

Najma202 on Wednesday, June 02, 2010
I love this song! I never biked on the streets of India, but I just love
this happy song. Back then, everything was classic, movie, actor, singer,
and then of course, the song. Thanks for sharing!