Video of this song from youtube
Average Rating : 3.95
Total Vote(s) : 370
Please rate this song between 1 star and 5 stars (5 stars being the best). Just move your mouse on the stars above and click as per your rating. Your rating will really help us to improve our website. 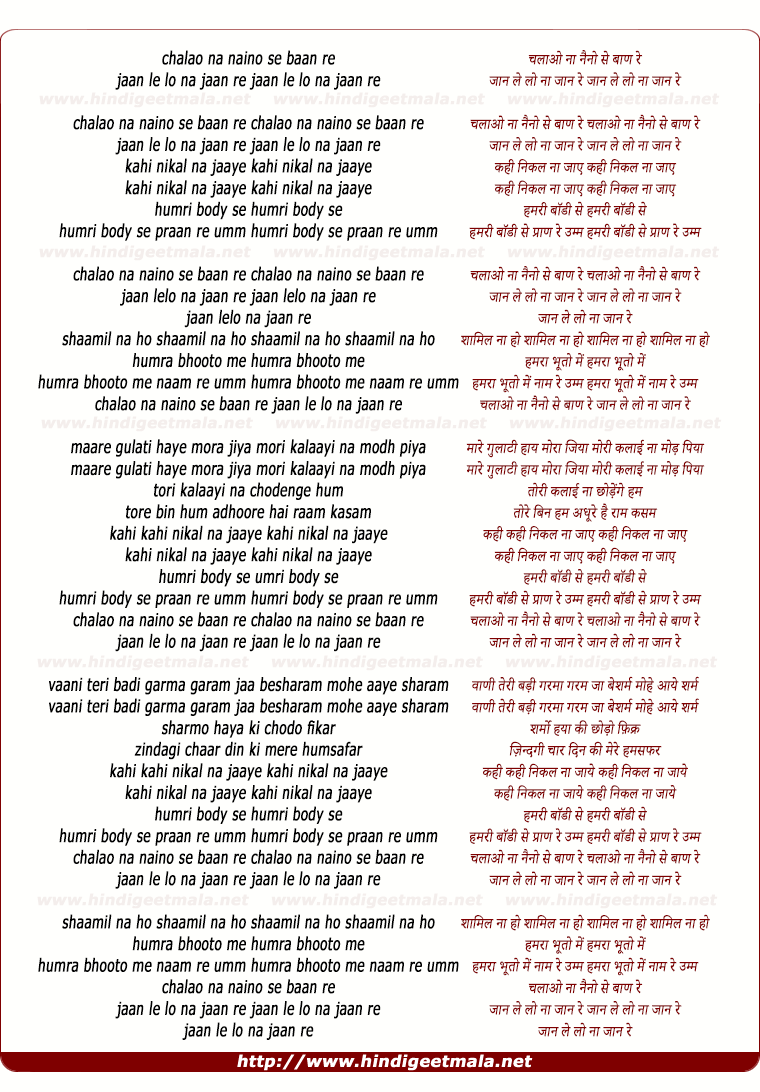 Comments on song "Chalao Na Naino Se Baan Re"
amitsah015 on Monday, August 13, 2012
Achha gaya hai is baar. awesome lyrics.
Abhijit Patil on Tuesday, July 31, 2012
can't agree more! But main thing is not the directorial disaster! but
actually the biggest highlight is Himessss bhai has sung so sweet for once
in his life!! remember the torture he has done before in the name of music?
Its like "subah ka bhoola sham ko ghar laut aya". So this calls for a
biiiig mercy for his earlier "musical militancy" (yes, I would herein like
to introduce this term:) :) :)

Tulsi Menaria on Sunday, July 08, 2012
really nice movie and song. AJAY devgan is and will always be the best but
in this movie as Abbas ali, abhishek bachan also did really good acting.
BEST COMEDY MOVIE EVER! could have been super duper hit if the comedy king
akshay kumar and action king ajay devgan both were in this movie.

Abhishek Sharma on Wednesday, June 27, 2012
have u been declared as the only person with taste in music. get ur head
out of ur stinking ass, u will be able to see the world. and for the
record, i dont have to be a fan to like a song

edrissw1 on Monday, July 02, 2012
you tseries what do you think of your self only you have the songs in this
whole world please back yur copywrite claim from my video i did not use
your songs i buyed them so please be fair