Video of this song from youtube
Average Rating : 4.35
Total Vote(s) : 367
Please rate this song between 1 star and 5 stars (5 stars being the best). Just move your mouse on the stars above and click as per your rating. Your rating will really help us to improve our website. 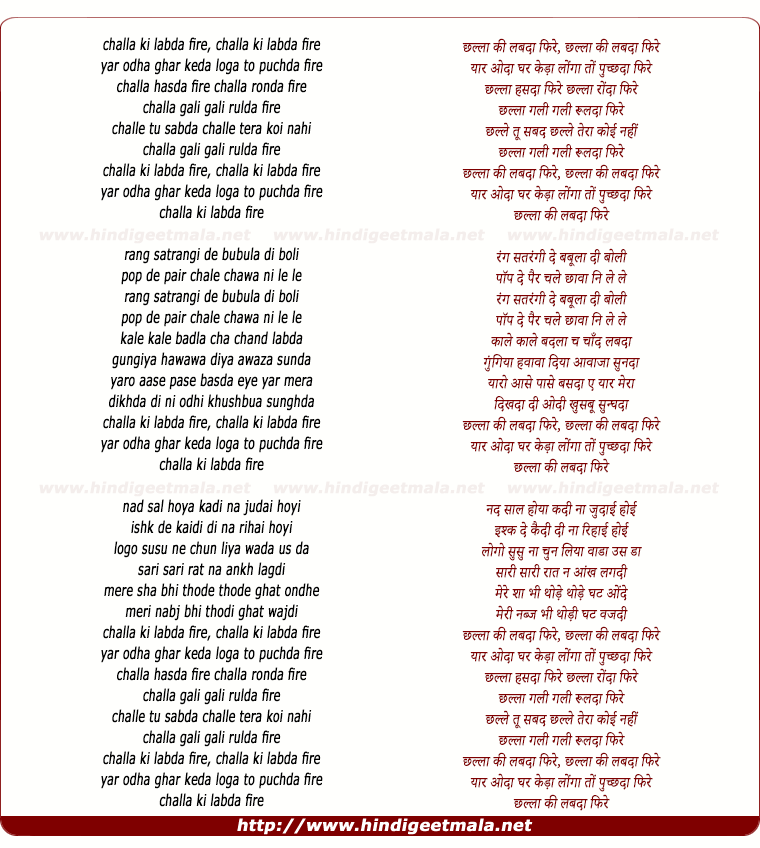 Comments on song "Challa Ki Labda Phire"
Shushanto Bose on Saturday, April 20, 2013
[2] ...that Rabbi Shergill produces. He is of great musical standing
anywhere in the World. Shah Rukh Khan is a "good actor" only in the tiny
world of Bollywood. If you compare him with ANY Hollywood actors, forget
about famous ones like Tom Cruise or Leo di Caprio, those actors whose
names you would never have heard, they can wipe the floor with SRK. Acting
is in their blood, just like music is in ours. In the Music world the
situation is exactly reversed.

Run The Jews on Monday, April 29, 2013
I am definetely not from india, but i know that one day it will become
developed, and if you want to be anti-indian, do it somewhere else. Go
shove your anger up your greasy ass.

shahkamalification on Monday, December 03, 2012
Oh my God!! Hats off. . Mr yesh sir.. One of the best movie for all time
and and this will remain forever hit like DDLJ..srk is incomparable actor.
.

Haravtar Singh on Friday, June 05, 2015
First of all hats off to Gulzar sahib what a mesmerizing poetry each word
has a unique meaning to it then kudos to singer, actor and musicians ﻿