Video of this song from youtube
Average Rating : 4.50
Total Vote(s) : 193
Please rate this song between 1 star and 5 stars (5 stars being the best). Just move your mouse on the stars above and click as per your rating. Your rating will really help us to improve our website. 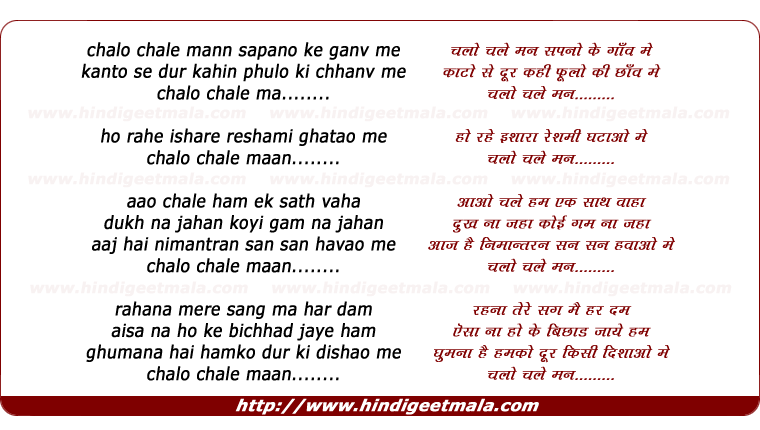 Comments on song "Chalo Chale Mann Sapano Ke Ganv Me"
Himanshu Muni on Tuesday, October 27, 2009
I viewed this movie in the Naaz theator in Mumbai. This is the best film
for the children by the children of the children. The character of this boy
was very sweet throughout the film. After viewing his accident, I cried and
cried for a long time. I have never ever have cried like that.Decades later
this film was shown on doordashan and all the children enjoyed the most the
pranks shown in the film. Thanks for taking me half a century
back.-himanshu.

rekhalalit on Thursday, November 25, 2010
What a lovely & sweet song by Asha Bhonsle Ji from film - "Jaagriti". This
song shows a real love between mother & son. Very poignant song. Super cool
& melodious song. Tears came in my eyes. What is the name of this boy ? If
he is in USA then I want to meet him because I am in USA also. I saw his so
many old hindi movies. He acted very nice. Prince Lalit Bhambhani Atlanta,
Georgia ( USA )

peddammayi on Thursday, October 23, 2008
Every minute of this movie is gripping and brilliant. These values were lived by abd seen. They were the soul of India where religion was not a barrier, everyone sought to overcome poverty and hardship with the strength of their values, without a penny in hand people took pride in their integrity and beleived that good comes to those who strive in the path of truth.
Mahesh Mehta on Tuesday, April 20, 2010
@basravi Ratan Kumar was a very talented and popular child artist who did
many prominent roles in films like boot polish,jagruti,bahut din huve etc.

tomsharma on Sunday, September 28, 2008
My mother used to sing this wen i was a child and we used to sleep on teraacein early sixties.!!Wat a time it was...Nostalgia!!!!
View all 29 comments related to song Chalo Chale Mann Sapano Ke Ganv Me
Popular Links on HindiGeetMala