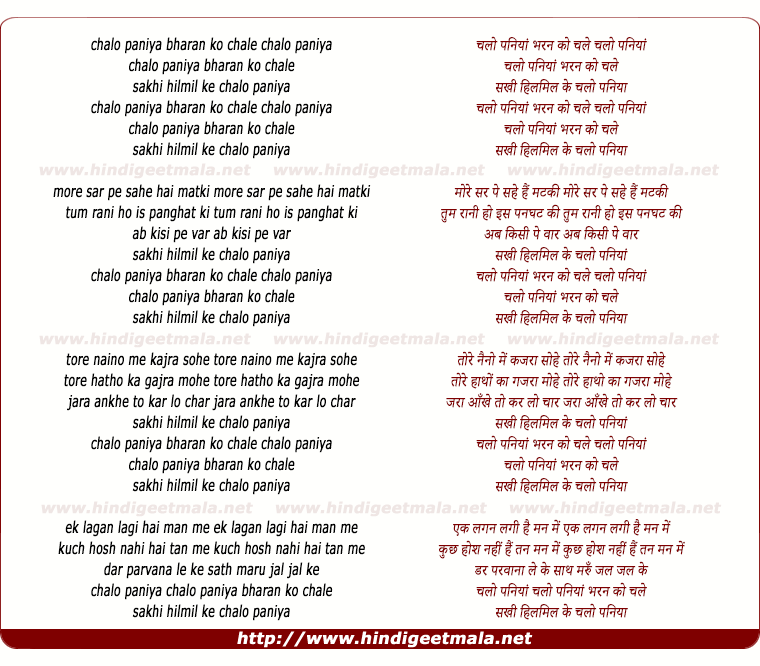 Comments on song "Chalo Paniyan Bharan Ko Chale"
Shalin Bhatt on Sunday, January 11, 2015
+Vidur Sury Based on other information I have seen on YT, 'Nishani' (1942)
was the first film for which Naseem Akhtar sang a solo ("Toot Gayaa Hai
Sapna"). She had a few duets in that film, but also sang for the
Punjabi-language film 'Patwari' in the same year. I'm not sure which out of
these three films, including 'Khandan,' was released first, or which had
her songs recorded first.﻿

Vidur Sury on Sunday, December 16, 2012
Thanks for appreciation Sir, well said. Unique and melodious use of
combined Punjabi and Uttar Pradeshi folk music, I think. That was one era
where quantity did never effect quality, even for an individual's career.
For eg. each individual song sung by Shamshad Begum Ji or Naseem Akhtar Ji,
or composed by Ghulam Haider Ji is a great gem even if a lot were there.

Vidur Sury on Saturday, June 18, 2011
@rehmaather Thanks a lot for appreciating Ma'am. Happy that you liked it.
Inshaallah may I be able to upload many more songs. This seems to be the
first song of the great singer Naseem Akhtar Ji, with available information
(at least Hindi). Both Naseem Akhtar Ji and Shamshad Ji were top singers of
the Punjabi side and my most favourite.

Vidur Sury on Saturday, June 18, 2011
@bkhan565 Thanks for appreciating Sir :) Loved it so shared with you all.
This seems to be the first song of the great Naseem Akhtar Ji, with
available information (at least Hindi).