Video of this song from youtube
Average Rating : 4.28
Total Vote(s) : 60
Please rate this song between 1 star and 5 stars (5 stars being the best). Just move your mouse on the stars above and click as per your rating. Your rating will really help us to improve our website. 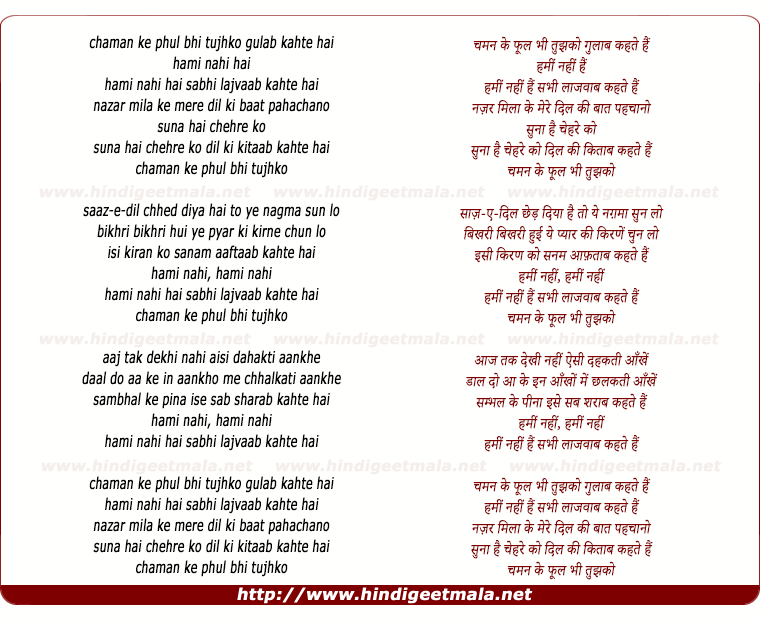 Comments on song "Chaman Ke Phul Bhi Tujhako Gulaab Kahate Hain"
Shyam Sunder on Tuesday, June 02, 2015
Great musical compositions from the baton of G.S.Kohli who is known as
being the arranger and assistant to great maestro O.P.Nayyar though he did
not compose music for so many films but whatever he did it was greatly
admired by the music lovers and critics equally. Films like Namaste Ji,
Faulad and Lambe Haath bear testimony to his great musical skills and
talent.﻿

Kay Cee on Friday, November 25, 2011
Only people with heart full of romance and mind a state library, can come
up with such wonderful lines!!!! ..tumhaare chehre ko dil ki kitaab kahate
hain...wow!!! This guy here is swooned so much that he covered his head to
pay her some obeisance!! Some way of thanks...haha... Thanks
tomandjerry2007 for this lovely share.

Jagjit Singh Ishar on Tuesday, December 17, 2013
The gr8 agony for the music fraternity & the music lovers is that the
highly talented G S Kohli never got that recognization he actually for his
repertoire which remained limited to mostly b grade films. I have no words
to speak about this gr8 legend his level is so high.﻿

Reincarnation on Saturday, December 27, 2014
a most delicious song..fantastic melody by the grossly under-rated g.s.
kohli and very beautiful lyrics by farooq kaiser.
all the songs of this movie were a super hit and in the AAA+++ category.
want to listen to them again and again; immortal music!﻿

Naveen Dighe on Wednesday, September 19, 2012
EVERY SINGLE SONG IN THIS FILM IS A SUPER SUPER GEM BELIEVE ME THE MUSIC
DIRECTOR WAS THE ERSTWHILE ASISTANT OF O P NAYYAR G S KOHLI IS IT NOT SAD
THAT THE THE HUGELY TALENTED KOHLI NEVER GOT HIS DUE THANKS AMITAJAI AS
USUAL A WONDERFUL UPLOAD FROM YOU