Average Rating : 4.00
Total Vote(s) : 14
Please rate this song between 1 star and 5 stars (5 stars being the best). Just move your mouse on the stars above and click as per your rating. Your rating will really help us to improve our website. 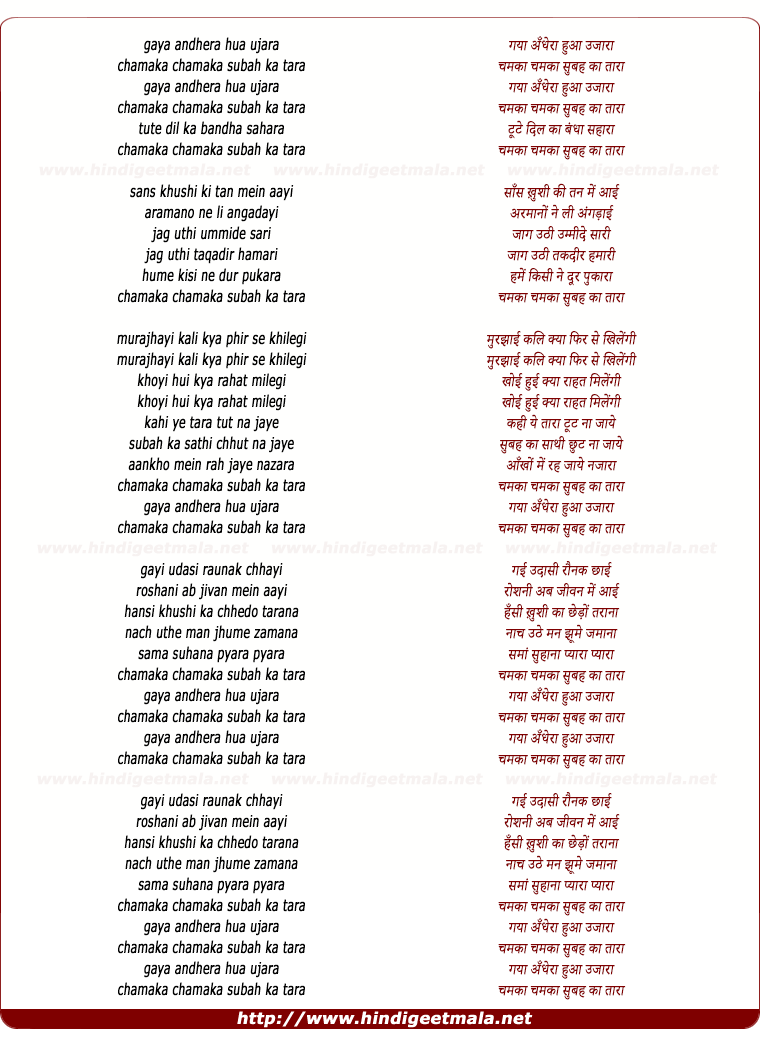 Comments on song "Chamka Chamka Subah Ka Tara"
Coucoutchicou on Thursday, May 05, 2011
The Jayshree of this clip was V.Shantaram's wife Rajshree's mother. She
starred notably in "Shakuntala", "Dr Kotnis ki Amar Kahani ", Dahej" - all
Shanataram productions and retired from the screen by the mid-fifties. Very
possibly, Subah ka Tara was her last film. Jayshree Gadkar on the other
hand came to the Hindi screen in the early '60s and acted mostly in
devotional films, although she was already a big star in Marathi films
before that.

Amarjit Madan on Tuesday, January 27, 2015
Superb wording byNoor Lukhnavi Murjhai kali kya phir se khilegi?
Magnificent score of C R is one of the best song .. What were the days
those days ? when the lyricist, M D stars and director combined effort
made the scene so real that we seem to share the woes of the character.
This was tragedy movie. Now a days movies lack every thing.Thanx for the
upload.﻿

Jagjit Singh Ishar on Thursday, August 12, 2010
@mastkalandr i value u very high, respect ur feelings & high taste. its a
fact that present day music has lost the soul injuring the minds of music
lovers. only 5%songs r worth listening. that golden era has gone never 2
return as where frm 2 bring the poets ,composers & singers of that caliber.
i watch ur channel & njoy the melodies of that golden era. thanx.

gopal sinha on Wednesday, September 25, 2013
Softness of talat and sweetness of lata- well combined by the
music-magician c.r.with excellent support from noor lakhnavi...very
positive with hope and happiness... yes the golden era vanished by late
sixties..