Average Rating : 4.46
Total Vote(s) : 114
Please rate this song between 1 star and 5 stars (5 stars being the best). Just move your mouse on the stars above and click as per your rating. Your rating will really help us to improve our website. 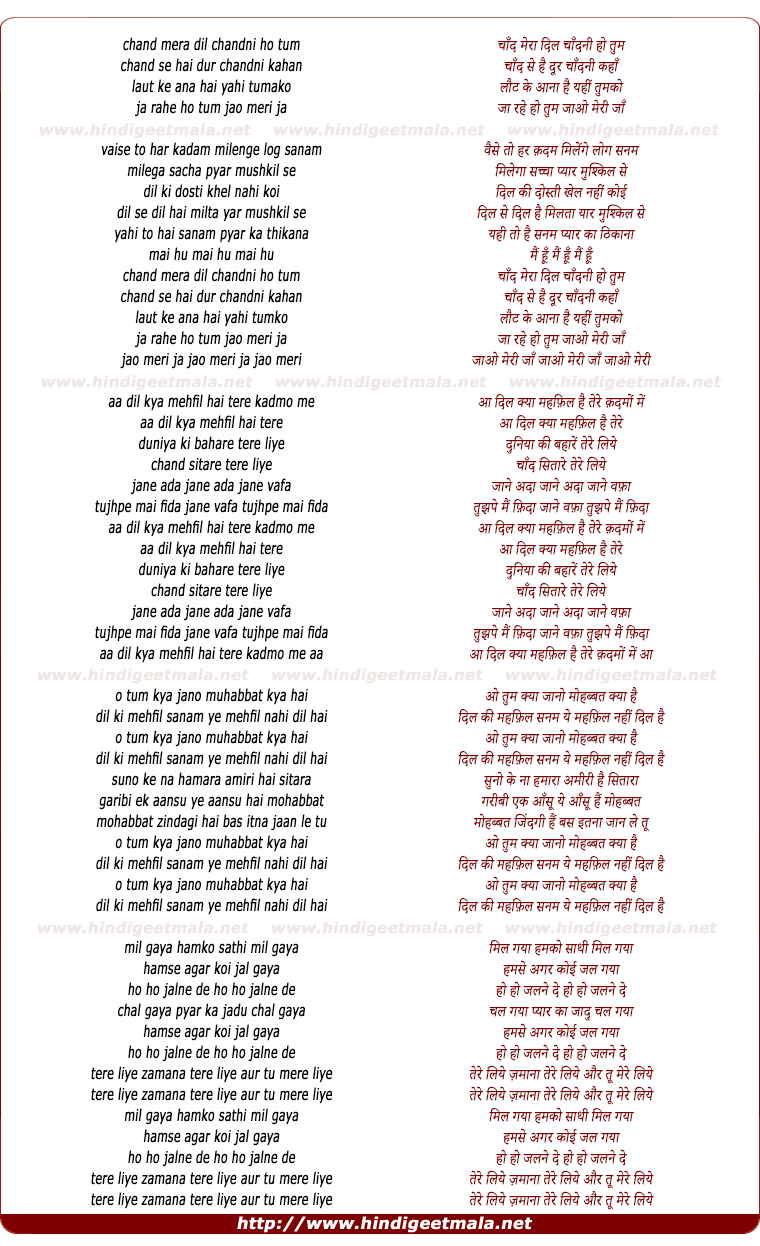 Comments on song "Chand Mera Dil, Chandani Ho Tum"
rahul sinha on Tuesday, July 08, 2014
The song has a story Nasser husain the producer of this film before making
''Hum kisise kam naheen'' was in London and in a disco he saw that disco
songs are playing unstoppably one after another and people's are dancing on
its tune he like the concept and share it with R.D that create a song where
it will be a bunch of 3 to 4 songs and they are playing unstoppably and
after that R.D create this song chand mera dill when he told the concept to
one of his friend that he will going to create some thing like this which
was not created before his friend told him not to do and suggest him if he
will do it will became a failure,but after release of the film the song
till date is a bench mark. ﻿

deepak deshmukh on Monday, October 12, 2015
I think RAFISAAB jaisa 'PAHADI AWAZ' duniyame available nahi. Lataji used
to outshine her co-singer like kishor, Mukesh, Mannade's some
songs,Mahendra kapur,Talat & all new male singers.But she couldn't /never
(99% songs) outshine Mohd Rafi.Even ladies liked RAFI-songs than songs of
other males.RAFIJI was romantic singer,but excelled in all types
quawalis,bhajans,patriotic, gazals,sad songs etc RAFI has outshone LATA in
all their duets-songs & all do pehlu songs. I am not comparing LATA with
RAFI, male voice can't be compared with female voice, but both are
celebrated superb singers.LATAJI got BHARAT- RATNA,even she would be
thrilled when her songs are compared with RAFI's.﻿

zulftarash on Friday, October 17, 2008
well, depends on how much you understnad it, if U r really unbiased and can really make up out all the musical, aurual and even public analysis, U will say urself that even not-so-very-good treatment by the music directors and not getting the to-be-supposed hit songs in masses, Rafi still sang some ordinary songs only to make them ever classic songs, just with shear perosnal skills and voice quality..come on manl give the person his credit, dont b so miser in it, u wil loose nothing in doing so
antu neelesh - Udit Narayan on Monday, June 13, 2011
@dimple4u well to translate word by word is difficult but i may give u the
summary - this song says "my luv u r my moon and never ever moonlight has
made distance from the moon...likeways even you try to go away from me u
can't as the moon and moonlight can't be seperated so plz go but one day
you'll return...you will meet many people in life but you won't find real
love easily...love is not a child's play and one gets his love amid
difficulties...and finally I am ur last destination"


TIRYAKOUN on Friday, July 23, 2010
Moh. Rafi is what 'Rossignol' Bulbul is for the birds. The best one.
Without him the story of Bollywood could be different. He is Bollywood. For
the foreigners that we are, Md Rafi is hindi movies and hindi movies are Md
Rafi. Ek great bulbul; Wah, wah. The indians are very lucky. If this singer
was french we will name every big boulevard and avenue in each city of
France (Md Rafi). I have rermarked that some indian are insuting him. What
a pity! Quel dommage !