Average Rating : 4.35
Total Vote(s) : 23
Please rate this song between 1 star and 5 stars (5 stars being the best). Just move your mouse on the stars above and click as per your rating. Your rating will really help us to improve our website. 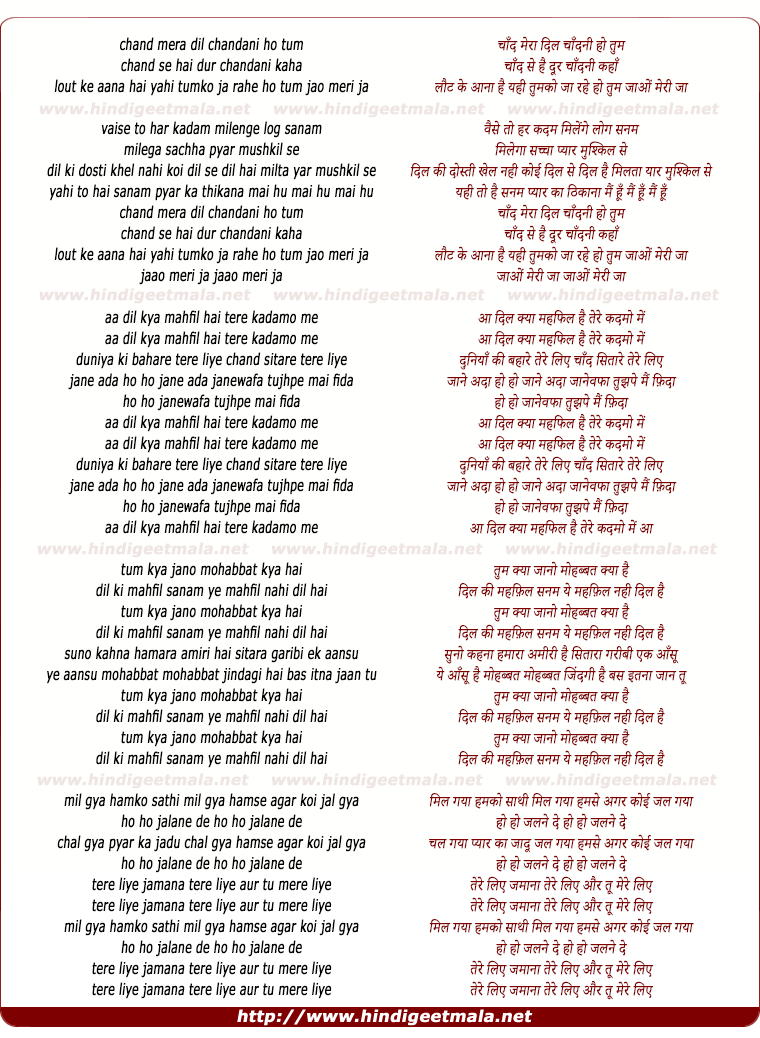 Comments on song "Chand Mera Dil Chandni Ho Tum"
rahul sinha on Tuesday, July 08, 2014
The song has a story when Nasser hussain the producer of this film was in
LONDON he saw that in a disco songs are playing unstoppably and people's
are dancing on its tune, he came and share the thought with R.D that he
want a bunch of 3 to 4 songs are playing unstoppably and that's how ''chand
mera dil'' created when R.D share the though with one of his friend that he
will going to create something like this his friend suggest him not to
create other wise it will became a flop idea but when the film release till
date the song is a banch mark.﻿

Lin Ansh on Tuesday, January 08, 2013
U r absolutely correct. Kishore kumar is not even a singer. He is the only
reason KJ Yesudas temporarily stopped singing in Hindi, even though Amitab
wanted KJY to be hos voice after Thrishul. Kishore was never a good singer
but very lucky and know how to play politics :-)

Jamal Nasir on Tuesday, November 10, 2009
Sir, It really means a lot to get the appreciation from you. Since, it's my
all-time favourite so I wanted to present it in a special way. & it's truly
a pleasure to share it with you. Thanks.

Jamal Nasir on Monday, November 09, 2009
You're always welcome Sis..! This song is also very close to my heart..I
get this mesmerized feeling whenever i listen to it..A truly romantic
classic with the flavour of Rafi Sb. voice..!!

Jamal Nasir on Wednesday, May 05, 2010
@1983bhagwat hi Bhagwat Many thanks for appreciating my efforts..This song
is my favourite too..This film is Hum Kisi Se Kum Nahin not Yaadon Ki
Baraat dear..