Video of this song from youtube
Average Rating : 4.88
Total Vote(s) : 17
Please rate this song between 1 star and 5 stars (5 stars being the best). Just move your mouse on the stars above and click as per your rating. Your rating will really help us to improve our website. 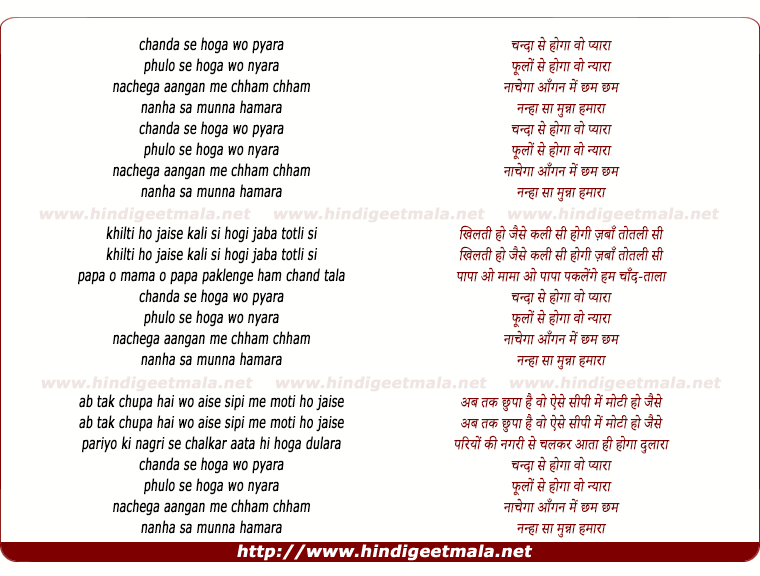 Comments on song "Chanda Se Hoga Woh Pyara"
munawar pasha on Thursday, November 15, 2012
chanda se hoga oh pyara, pholonse hoga oh nayara, this beautiful song was written by rajendra krishan,composed by chitragupta,sung by pb srinivasan and latha di,picturised on dharamji and meenakumari. this song is special to me because first time i saw dharamji and became his fan permanantly. i remember hav ing jumped the coumpound wall of lalbagh where this song was shot,when all the four gates were closed.
Jagjit Singh Ishar on Saturday, May 29, 2010
saw this movie as a school going boy & its all songs were melodious. this
song is so sweet that i often play on mouth organ when i m alone. lata the
melody queen so sweet with her honey sweet heavenly voice & so is p b
sirinivas who sung equally so nice vindicating his being a real legend.
hats off 2 chitragupt 4 composing such sweet melody. thanx for such nice
melodious posting.

apparaoarani on Thursday, March 10, 2011
To call this Singer as Ghantasala , is a insult to Ghantasala as well as PB . Mahagedara's introduction is correct. this singer is Prathivaadi Bhayankara Srinivas only. You may press " Show more " above, to know Mahagedara . Please avoid posting comments like this . Sorry I am writting this to prevent WRONG DATA on records.-Arani.Apparao-Hyderabad-A.P.
Akash Shah on Thursday, July 07, 2011
@apparaoarani i read somewhere that the singer is sp srinivasan. but i have
no idea what the truth is .. some sources say pb srinivas, others say sp
srinivasan. is this pb for sure?

jasbongy on Friday, August 28, 2009
Yuan ji thanks for this beautiful duet. It reminds me of my teenage,when we
whole family used to watch most of the films. 5*****With best wishes. Sarla.