Video of this song from youtube
Average Rating : 4.54
Total Vote(s) : 26
Please rate this song between 1 star and 5 stars (5 stars being the best). Just move your mouse on the stars above and click as per your rating. Your rating will really help us to improve our website. 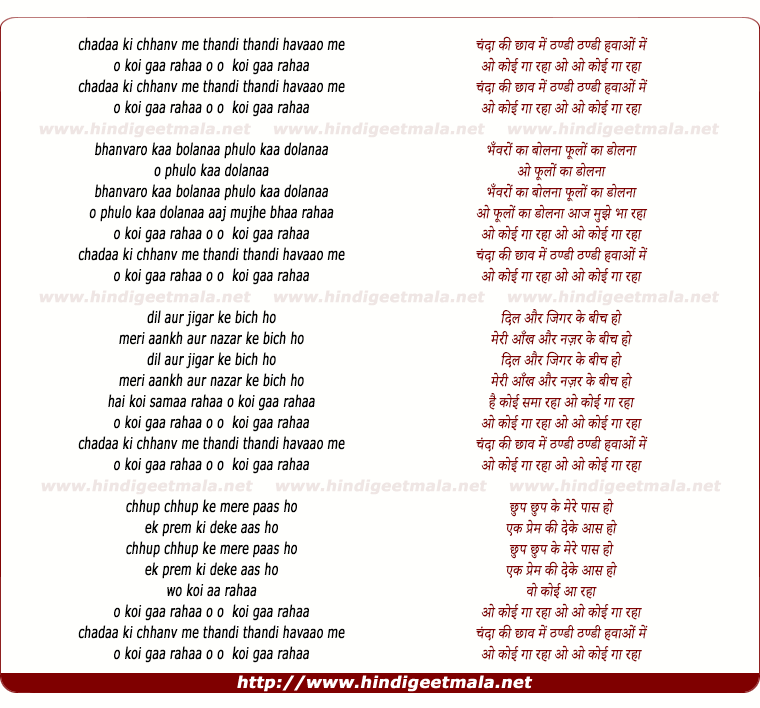 Comments on song "Chandaa Ki Chhaanv Me, O Koi Gaa Rahaa"
Bajaury on Tuesday, February 09, 2010
I am surprised at the average of the ratings for this song, being less than
five stars. How any one in his right listening mind give this song less
that five stars? It is pure heavenly. It soothes the heart and soul. I
would rate it as Lata's best.

V. Siddhartha on Monday, April 07, 2008
All Parchhain songs are dipped in honey of the most divine variety. They
have become classics and will remain so. Thanks to all posters for the
different uploads.

Naresh Mankad on Saturday, September 06, 2008
One of Lata's sweetest melodies. C. Ramchandra was made immortal by some
such films.

shenzymaya on Thursday, January 27, 2011
where can i watch and download this movie plz plz tell me guys. i would be greatfull...
View all 8 comments related to song Chandaa Ki Chhaanv Me, O Koi Gaa Rahaa
Popular Links on HindiGeetMala