Average Rating : 4.30
Total Vote(s) : 190
Please rate this song between 1 star and 5 stars (5 stars being the best). Just move your mouse on the stars above and click as per your rating. Your rating will really help us to improve our website. 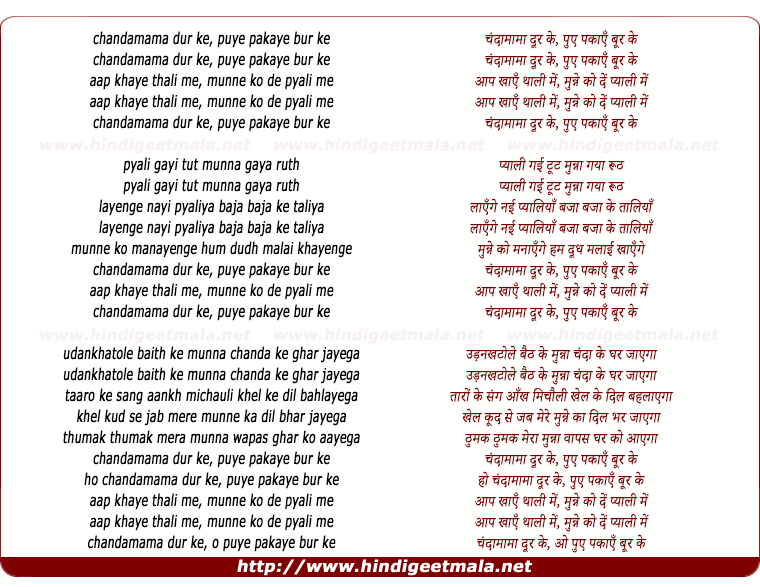 Vasant Pusalkar on Friday, December 25, 2009
Thanks for a nice song. Ravi was never appreciated in his time by big wigs.
However, I am Ravi fan. His songs are melodious and pleasing the years &
soul. some of Rafi;s best songs were given by Ravi. Ashatai's voice was
perfect for his songs. Mahendra Kapoor's best songs are only with Ravi.

BOB IYER on Saturday, May 14, 2011
I know Ravi gave the music for this film but could anybody tell me who
wrote this beautiful lullaby please? I also know Pandit Mukram Sharma wrote
the story.There is one more good song in this film called," Ek paisa dey
dey,oh jaanewale babu ek paisa dey dey."

Rakesh Sharma on Sunday, May 22, 2011
Great RAJINDER KRISHAN wrote this lovely song. He was a true magician, who
created magic by selection of words and poetry, rightly known " shabdon ka
chitera" means magician of words, he gave numerous gems to Indian cinema,
this song is an example

bombaytalkyz on Sunday, December 26, 2010
My mother also use to sing this beautiful number as a lullaby to me when I was very young...:) Thanx for uploading this melodious number. Haardik shubhkaamnaayein.
View all 73 comments related to song Chandaamaamaa Dur Ke Pue Pakaaen Bur Ke
Popular Links on HindiGeetMala