Video of this song from youtube
Average Rating : 4.42
Total Vote(s) : 12
Please rate this song between 1 star and 5 stars (5 stars being the best). Just move your mouse on the stars above and click as per your rating. Your rating will really help us to improve our website. 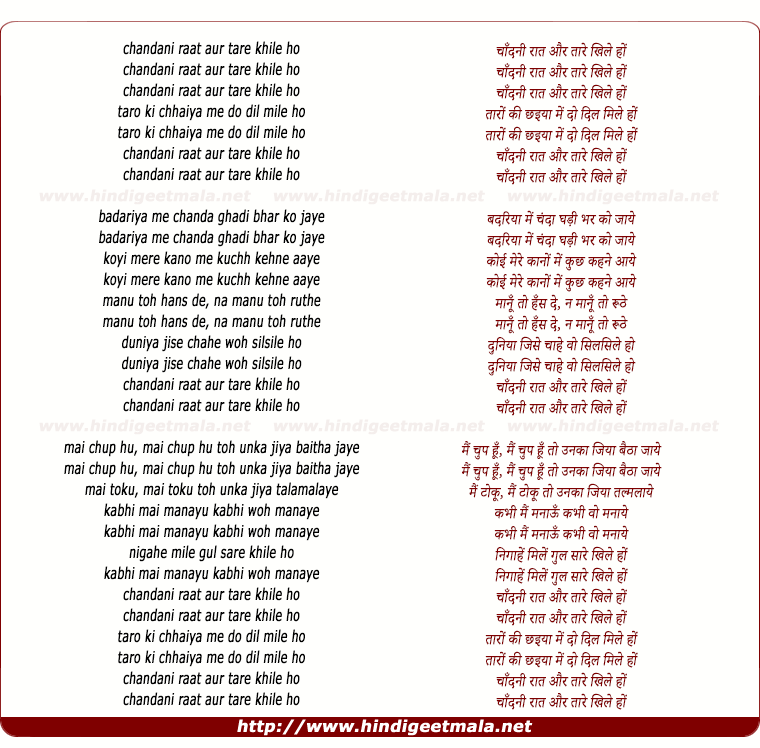 Comments on song "Chandani Rat Aur Tare Khile Ho"
ved prakash on Saturday, July 23, 2011
exemplary duet most melodious. credit goes to the singers, KL Saigal and Khursheed as well as (not to forget) to the one of the greatest filmi Muisic Directors of Bollywood, Gyan Dutt for the composition and recording of this exquiste song.
Siddique Ahmad on Friday, December 16, 2011
Maybe I am wrong, but I feel that the speed is marginally slow ( The sound frequency is low )..This is one of the best duets in our music history. Another great duet by the master is with Rajkumari; Sar par kadam ki chhanyyan muraliya baaj rahi .
Sanjay Kesar on Wednesday, July 25, 2012
beautiful.one can only like it..K.L. saigal was not great but above that,,,No formal training...but his voice is too good
Basheer Ahmed Khan Azeemi on Friday, December 03, 2010
Two great voices ..I love saigal and listening him when i was 11/12 yrs old ..
Thanks for sharing . .. :)

romeshmajotra on Tuesday, February 21, 2012
Many thanks for this celestial song. If there is any video available from BHAKTA SURDAS pl upload that.
View all 13 comments related to song Chandani Rat Aur Tare Khile Ho
Popular Links on HindiGeetMala