Video of this song from youtube
Average Rating : 4.53
Total Vote(s) : 70
Please rate this song between 1 star and 5 stars (5 stars being the best). Just move your mouse on the stars above and click as per your rating. Your rating will really help us to improve our website. 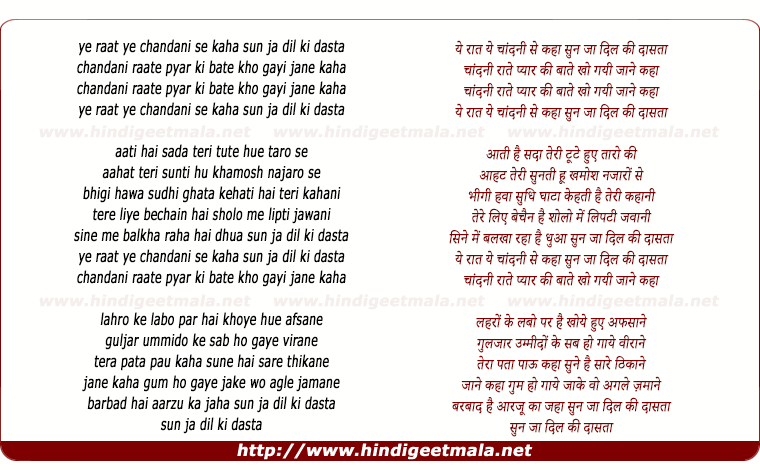 Comments on song "Chandni Raate Pyar Ki Baate"
Zil Hasnain Kazmi on Tuesday, March 08, 2011
I would salute to Hemant Kumar´s courageous step to enter into singing
arena. He knew exactly that his voice was just as normal as one could
imagine. What persuaded him to proceed, his bank with full of compositions.
Even an established Lata Mangeshkar at that moment could not refuse
him.What a legend? He has scored beautiful duets with this nightingale.This
particular song is one of them.It is pleasure to listen to such great
performer. I love this song. Great S.D. Burman, evergreen.(8-3-2011)

Rmehtacpa on Sunday, April 24, 2011
Barely five years of age in those days were we and yet when I listen to the
song it takes me right back to the time we used to put the 78rpm record on
that manually operated Garamophone and the TUNE yes still sounds same as
the..time that it used to...

kumcha3 on Saturday, September 15, 2012
Hemant Kumar was a fine singer with a deep voice usually lacked by other
Hindi singers except for Mukesh. The other singer was K.J.Yesudas, but his
voice had a shiver.

Satish Chopra on Tuesday, March 26, 2013
Hemant Kumar was certainly at his best when he sang for other composers.
This is one melody which has not certainly faded with the passage of time.
The other classic numbers include- 'Ganga aye kahan se' (Kabuliwala- Salil
Chaudhry) and 'Chandan ka palna resham ki dori' (Shabab- Naushad).

Apoorv Shah on Sunday, January 10, 2010
brilliant composition... great singers.. wonerful actors..thank you so much
for uploading this song..thanks and thanks again.