Video of this song from youtube
Average Rating : 4.60
Total Vote(s) : 2509
Please rate this song between 1 star and 5 stars (5 stars being the best). Just move your mouse on the stars above and click as per your rating. Your rating will really help us to improve our website. 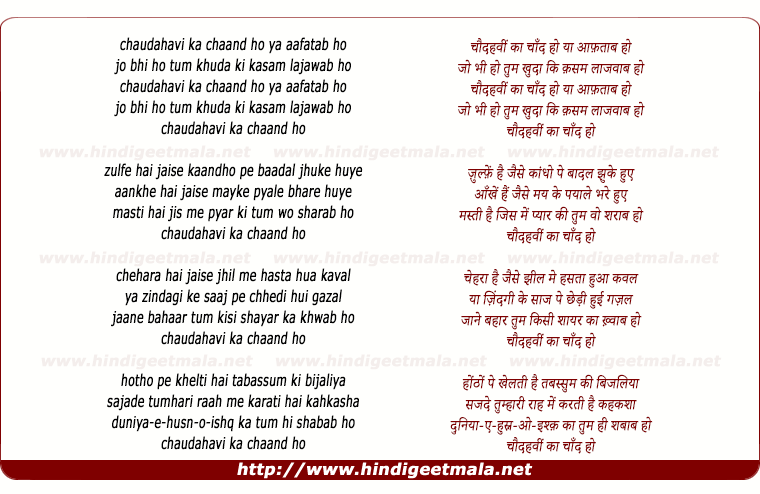 ShivKumar44 on Friday, May 11, 2012
@qilinmelb:Not sure if wrote correctly. You are absolutely right.In those
days Indian Movies use to Play Allover the world including Russia.In mid
sixties an author wrote me a letter form NY as I wrote her a letter for her
writing.In reply she mentioned that she had watched Satyajeet Roy's The Big
City(MAHANAGAR) and normally Hindi and Bengali movies use to play in all
over USA. Mohd Rafi forecast something after the demise of S.D.B. So songs
and movies are gone.Do you go to a movieTheatre?


sonny19xx on Wednesday, May 26, 2010
a very good song . Waheeda looks so fairy like. The lyrics ..the lyrics to
praise this lyrics should be atleast of divine standard. since iam not
capable i will leave it alone. no words. the same goes for the voice that
sings these words. that is rafi. what diction what clarity. guru dutt
enacts so well. last but not the least ravi's music matches up to the
standards of everything elseabout this song. thanks gussie5555