We will add as soon as the video of the song is available.
Average Rating : 4.50
Total Vote(s) : 2
Please rate this song between 1 star and 5 stars (5 stars being the best). Just move your mouse on the stars above and click as per your rating. Your rating will really help us to improve our website. 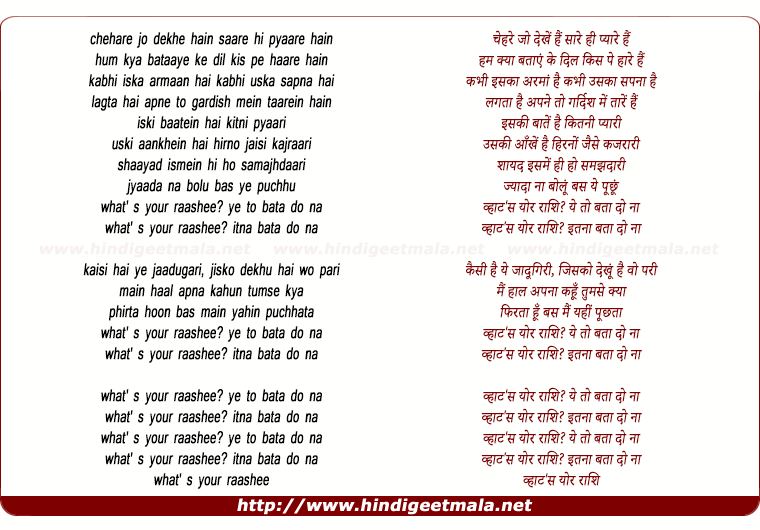 Comments on song "What' S Your Raashee (Title)"
Trinibaybeex55 on Wednesday, April 20, 2011
@khushboo861 _ .. first off her eyebrows are draw on, because you can tell.. look at all the other Raashee's their eyebrows are the same because they are all being played by Priyanka.. next her oufit is a traditional one.. so dont come with that.. and last why you got to call her unclean and ugly.. yuh dum*... she plays a fifteen year old here.. if she so ugly and Champak.. why would you waste your time comenting about her. god forbid you have a daughter and your daughter come out like that..
MiSSloveish on Thursday, January 20, 2011
@khushboo861 - What part of her do you find unclean & ugly? Her natural/undone eyebrows? Guess what?! EVERY girl is originally like that (to some extent). Women (usually richer, older & more modern ones) nowdays just tend to do their eyebrows. It doesnt imply uncleanliness. If you find this unclean/ugly, you're saying EVERY GIRL is BORN ugly! The way she dresses? Its a traditional indian outfit (though less modern). Young, poor, & traditional = ugly?! Careful how you define unclean & ugly.
rasha nour on Wednesday, July 20, 2011
this one is my favorite movie now.take a look at every girl's expressions &
even the way eachone of them dances is different & they all represent their
signs exactly but with alittle exaggeration just to stress on the character
they are introducing. for me i'm proud to be the sagittarius girl even
though she hit on him & she was so seductive! but i loved every single one
of them & if i was yogesh i would marry them all.

rbehani777 on Sunday, September 12, 2010
Dunno y this film dint work.. I found many people who liked it though..
Just it was 2 lengthy n d end was a bit dragging.. D underage girl and the
girl who prepares kundali.. cld hav cut shrt dere..

Iva Ahmed on Monday, January 19, 2015
I have to admit priyanka can do anything, this song and all the characters
that she played very well and handled very easily has inspired me a lot
hats off to her man!! And to the guy! Lol﻿