Video of this song from youtube
Average Rating : 4.61
Total Vote(s) : 23
Please rate this song between 1 star and 5 stars (5 stars being the best). Just move your mouse on the stars above and click as per your rating. Your rating will really help us to improve our website. 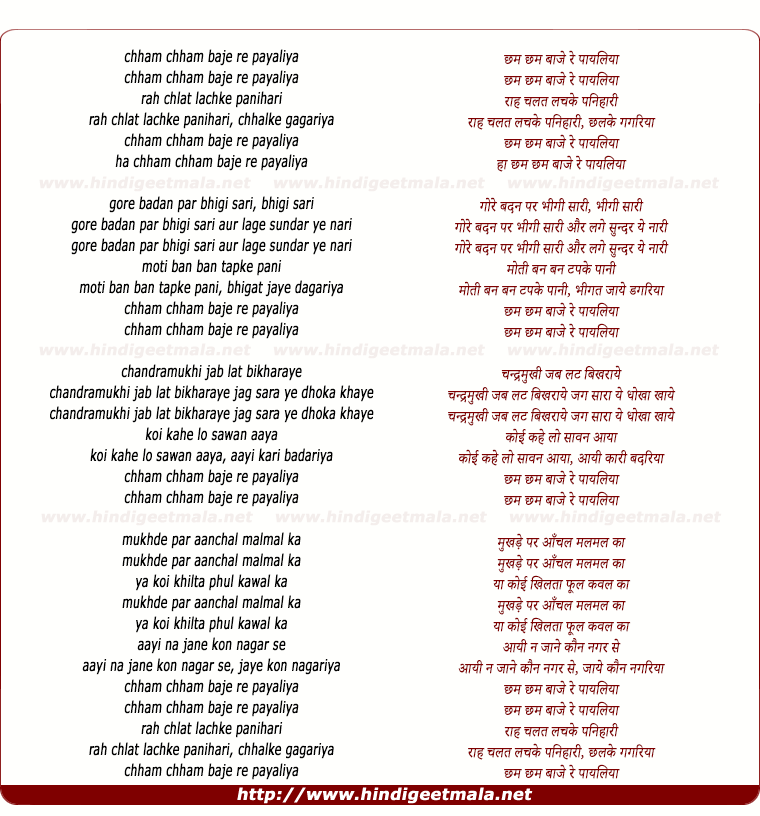 Comments on song "Chham Chham Baaje Re Payaliya"
tyagnesh on Thursday, October 22, 2009
This is one of the best song by Manna Dey. The music and words create such a nice imaginary scene which is very hard to create using wrong costumes for the heroine. The words say about saari and Leena is waring Odhni. Words say about lat and Leena has no lat on her face from her hair. The words mention the gagar spilling and not breaking. In the last part the gagar is missing. Shammi Kapoor is funny as usual.
lindlin123 on Wednesday, January 21, 2009
Thanks a Lot!! I have to agree with you.Shammi Kapoor does kinda
exaggerates with his movements,it's funny how he over does it!!! Especailly
after seeing that video "yeh chand sa roshan chehra" from "kashmir ki
kali".It was hilarious How falls off the boat LOLOLOL!!!!

kuckudk on Thursday, July 29, 2010
Manna De best when singing songs based on Shastriya Sangeet, this is my
favorite song, I wish I could sing like Manna De. Thank you very much
Suhanee for posting such Gems. Please post more songs by Manna De.