Video of this song from youtube
Average Rating : 4.40
Total Vote(s) : 230
Please rate this song between 1 star and 5 stars (5 stars being the best). Just move your mouse on the stars above and click as per your rating. Your rating will really help us to improve our website. 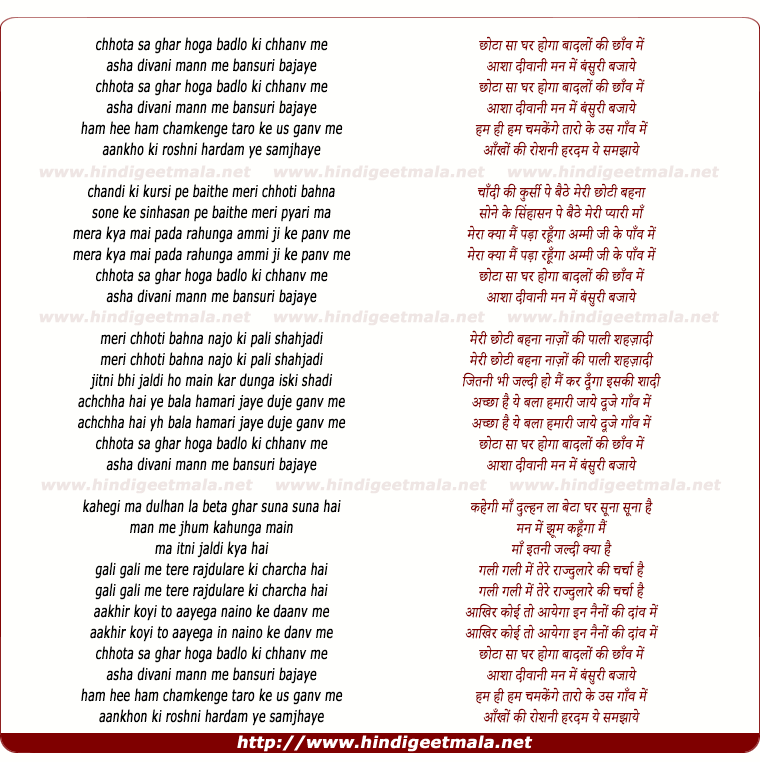 Comments on song "Chhota Sa Ghar Hoga Badlo Ki Chhanv Me"
RealMusicKing on Tuesday, May 11, 2010
Naukri was Bimal Roys second production which failed miserably. The next film "Devdas" with Dilip Kumar was a smash hit. That's the difference between Dilip and Kishore.or shall one say "Apples are apples and oranges are oranges"
rahul sinha on Monday, June 16, 2014
The film has a story when it was said by somebody that kishore kumar will
going to sing the song as he is the hero of this movie,salil chaudhary
replied that i will going to listen his voice first and if i find his voice
is suitable for the song then only i will record the song with him other
wise i will call somebody else for the recording as i will not going to
compromise with my music.﻿

Coucoutchicou on Saturday, March 05, 2011
Angelsblessyou, I'm afraid the 1% prevails... It is not Usha Mangeshkar but
Asha Bhosle who accompanies Kishore in this song. The first song that Usha
recorded was much later - Aplam Chaplam - with sister Lata, as recounted by
Usha herself in the video "Lata in her own voice" (by Nasreen Munni Kabir).

rk10101 on Monday, December 17, 2012
Kishore was a well established singer in 50s (with Eena meena dika,
Nakhrewali and 100s of superhit songs) itself with many hits. With Aradhna
he came to the top as singer. Probably you are writing what you have read/
heard from media - suni sunai batein!

Dilip S. Coulagi on Saturday, September 12, 2009
An unforgettable song from way back when. I'd never forgotten it, and heard
it here after such a long time - a song which brings a smile to your lips
and tears to your eyes! Thanks so much for posting this.