Video of this song from youtube
Average Rating : 4.28
Total Vote(s) : 502
Please rate this song between 1 star and 5 stars (5 stars being the best). Just move your mouse on the stars above and click as per your rating. Your rating will really help us to improve our website. 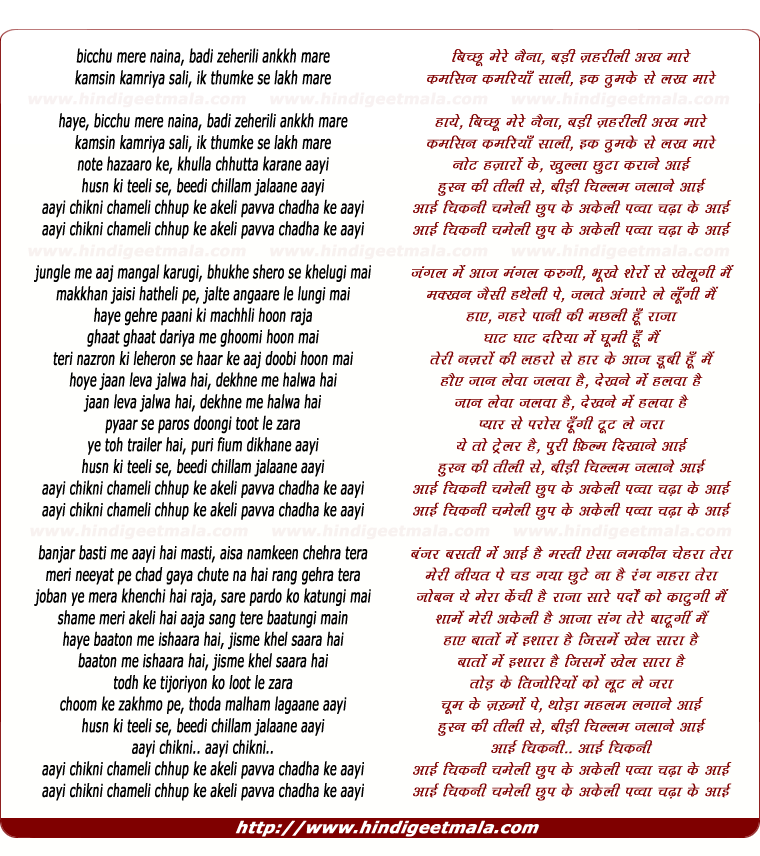 Comments on song "Chikni Chameli"
ada smith on Friday, August 03, 2012
I can make high quality fake id,and our price is the lowest, If you want to buy one?email to: adasmith501@yahoo.com.I promise that these fake ids can be use every where, they scan and swipe and show all information that is on the card in the proper format.
amit sharma on Monday, October 19, 2015
katrina kaif is such a great talented gal , a perfect package of best
beauty nd actin skills both. she has so xtremly well shaped figure..
deepika padukon, priyanka , kareena kapoor can't touch to that heights of
success even in their dreams where shez now.. She not only rules the heart
of Indians but overseas too. katrina when she quickly picks typical Indian
dance steps so easily really shocks us and wow wtt a perfect acting she
does.. shez is talented.. keep it up katrina India and many others love nd
respect you a lot.. nd let those jealous burn their blood n brains by
criticism. doesn't matter at all.
v luv u a lot..﻿

Brazenyolo on Tuesday, October 06, 2015
Omg i love this song i love Bollywood movies songs.
Well, Agnipath, or Agneepath as they spell it in the name of the movie,
literally means the path of fire, as Agni is fire and path is a path, way.
The meaning of Agnipath is a difficult path, one that is very difficult to
walk on, and in the poem written by Harivansh Rai Bachchan, it means a
tough life, with all the problems working as fire on the path of life.﻿

raincoathaveli on Monday, July 21, 2014
Katrina has improved a lot with her dancing. When she first started it was
she was so bad it was painful to watch. With that said, the truth is that
she stick to non-indian dancing because its clear she is unable to give
tradational indian dancing justice. As many have noted, she does not have
the desi flavor needed for a dance like this.﻿