Video of this song from youtube
Average Rating : 3.91
Total Vote(s) : 80
Please rate this song between 1 star and 5 stars (5 stars being the best). Just move your mouse on the stars above and click as per your rating. Your rating will really help us to improve our website. 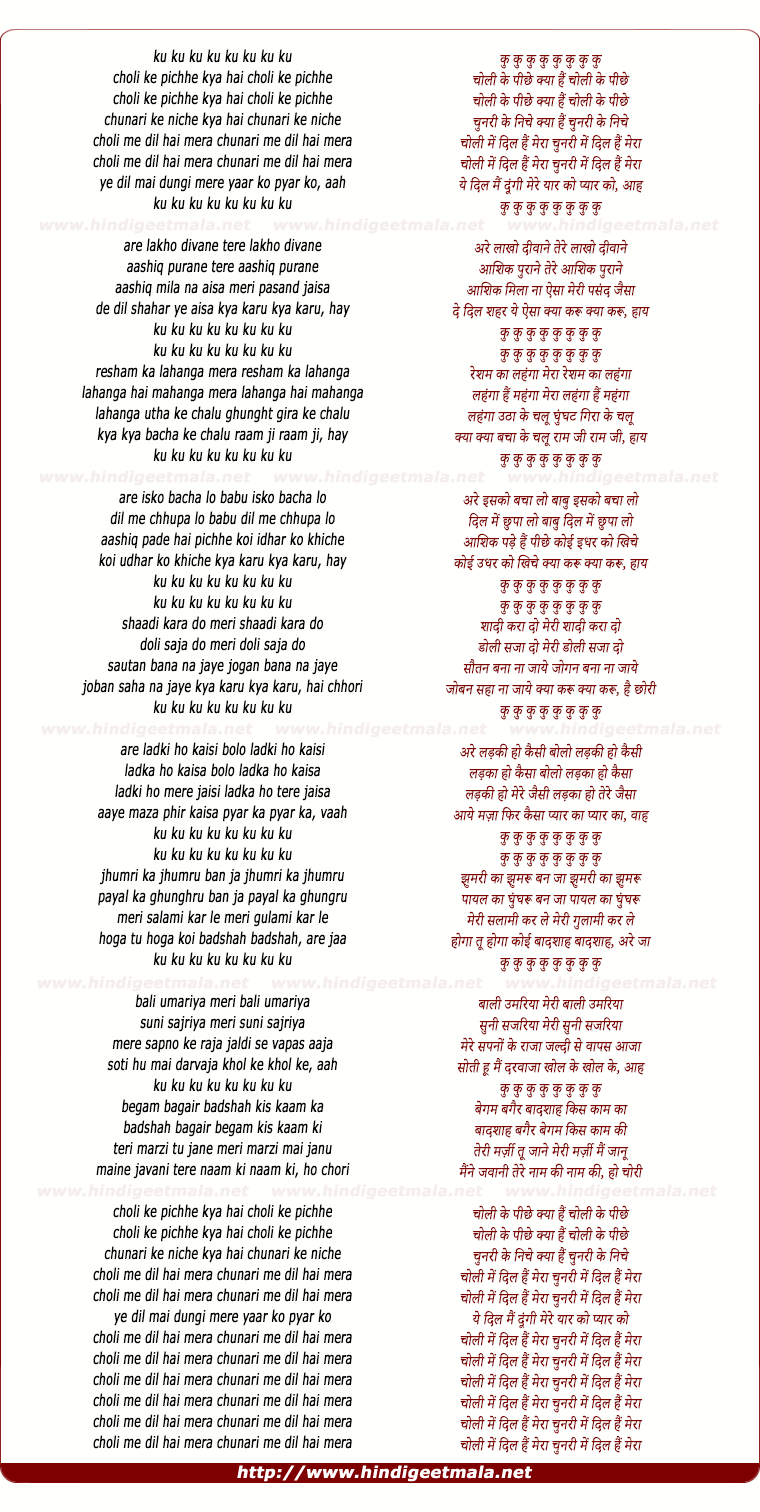 Comments on song "Choli Ke Pichhe Kya Hai"
janingrigory on Monday, December 17, 2007
Madhuri's dancing is just superb and she looks very pretty.
Salah Traa on Thursday, September 24, 2015
You are watching the last queen of Bollywood. A self-made woman. She
becames the queen of Bolly because she received a giflt from God and has
worked so hard. She is the daughter of people. She has got the keys of
Bolly with her talend sirf with her talent not due to her family help,
assistance or money. In my opinion, she delivered one the last item number
of traditional indian dances (with the others items of Devdas). She reigned
during 25 years over Bolywood without any assistance of a
fahter/mother/brother/uncle/aunt or parents in law like ... (the list is
very long). When you see the actresses of present and last decades moving
their asses with vulgarity, you know why : they can't deliver a such item
number even with their faces cause they aren't issued from the great
scholls of indian traditional dances like Madhu. And last but not least,
they even call what they are doing modern dances and good jobs. People are
amazed and applause mediocrity cause they are living in a cultural
mediocracy. Poor of us. Ek bar, a crow wants to imitate the pigeon way of
walking, guess what's happened ? : He has forgotten his proper way.
Fatality. But the shows must go on. Entertainment, entertainment,
entertainment. Ah ha !﻿

Wery on Friday, November 28, 2014
Awesome choreography.. Madhuri had real talent... Todays Sonakshi Dipika
cant match her... Madhuri worked really hard.. you can see that from the
dance moves through the song. Her facial expressions are so natural
(particularly the scene 6:12 to 6:30, and 4:01 to 4:07 that look while
doing that dance move ... Kudos to Saroj Khan too.. Madhuri shot to fame in
her time.. I think she deserved more respect and recognition...

Foreigners commenting on this song cant understand indian culture and
expressions.. every culture has different expressions... american chinese
japanese african... all are different..﻿

Bipul Roy on Tuesday, November 08, 2011
She manages to be the best actress ever but has no one National Award in
her bag. Only pairs herself with talented actor like Anil Kapoor. At the
age of 17 She enters in Bollywood and manages big cinema makers like S.
Ghai, Yash Chopra, Rajshri, R K Santoshi etc and gives us Choli ke pichhe,
khambe jaisi khadi, Dhak Dhak karnelaga item Numbers. Her biggest hit HAHK
is the remake of Nadiya ke Par which was already hit for the storyline. I
want to say she's a good actress, but not the best one.

Bipul Roy on Wednesday, November 09, 2011
Anyone without a filmy background may be beautiful and has given 1/2 major
hits have to be accustomed to this rule otherwise if You are over concious
about your self-respect then be saved delivering a blowing pat on open
set(Suchitra Sen), be an alchoholic(Meena Kumari), Keep Quiet Mum(Manisha
Koirala, Mahima Choudhury, Preity Zinta etc) or be murdered (Divy Bharati)
or leave industry (Mamta Kulkarni)... The truth is buried here! It's bombay
film industry dear!! Ha Ha Ha Ha Ha!!!