Average Rating : 4.33
Total Vote(s) : 6
Please rate this song between 1 star and 5 stars (5 stars being the best). Just move your mouse on the stars above and click as per your rating. Your rating will really help us to improve our website. 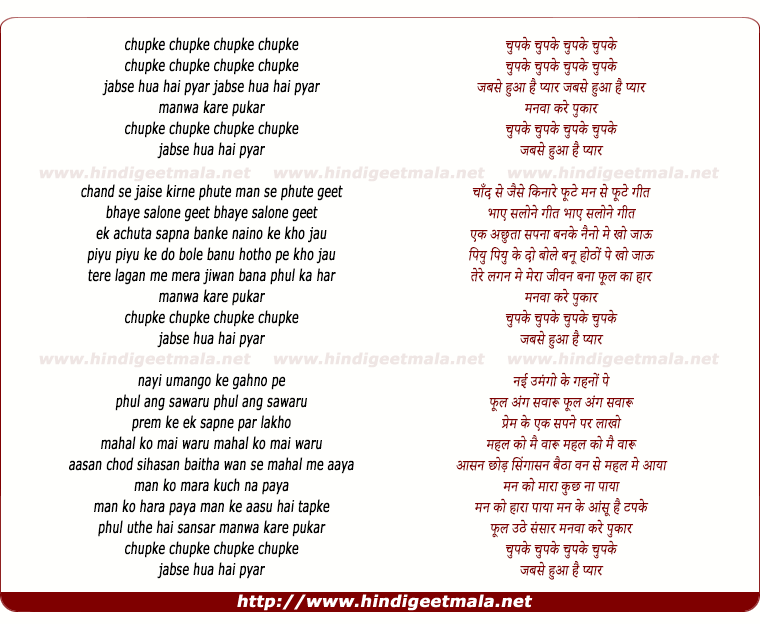 Comments on song "Chupke Chupke Jabse Hua Hai Pyar"
Colonel Rao on Thursday, November 03, 2011
Great song by Geetha Dutt and immortal Surendranathji. He gave play back in
this song for Trilok Kapoor . This movie was first made in Tamil and was a
hit and re made in Hindi.There are only few songs( Duets) with Surendraji
and Geethaji and all are excellent. Thanks for up load. There is one more
duet in thsi film. Please up load it.

LakshmiNam on Saturday, March 30, 2013
I have posted an improved audio version of this song. Radio Ceylon cited
this song from film Goraknath. Can someone clarify which is the correct
film title. My audio can be found by putting the usual youtube prefix to
watch?v=CJvSPT36V0M get the full URL, as YT doesn't allow posting full URL.