Video of this song from youtube
Average Rating : 4.35
Total Vote(s) : 609
Please rate this song between 1 star and 5 stars (5 stars being the best). Just move your mouse on the stars above and click as per your rating. Your rating will really help us to improve our website. 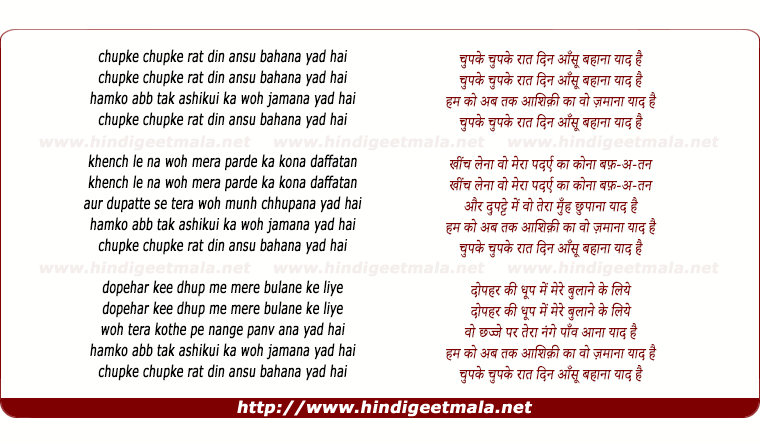 Comments on song "Chupke Chupke Raat Din"
Bharat Gul on Thursday, September 01, 2011
If anyone "owns" this ghazal for eternity, it's Ghulam Ali. No one else
has ever sung it as well as he did. The flashbacks in the poem and the film
are perfectly aligned, especially the man's bare-footed beloved going to
her roof at high noon in response to his plea. Priceless imagery. Thanks,
Suhanee.

Spice Binjad on Saturday, September 12, 2015
14 people who disliked this video,remember god will take revenge from for
this.
This song is classic and epic.﻿

925shams on Tuesday, January 05, 2010
nice i love it thanks 4 posting it if tells you about love and sadnes about life love it
manishmahera on Tuesday, December 15, 2009
you tube is best than any otherside really nice clearity like to se videos on it
View all 32 comments related to song Chupke Chupke Raat Din
Popular Links on HindiGeetMala