Average Rating : 3.56
Total Vote(s) : 432
Please rate this song between 1 star and 5 stars (5 stars being the best). Just move your mouse on the stars above and click as per your rating. Your rating will really help us to improve our website. 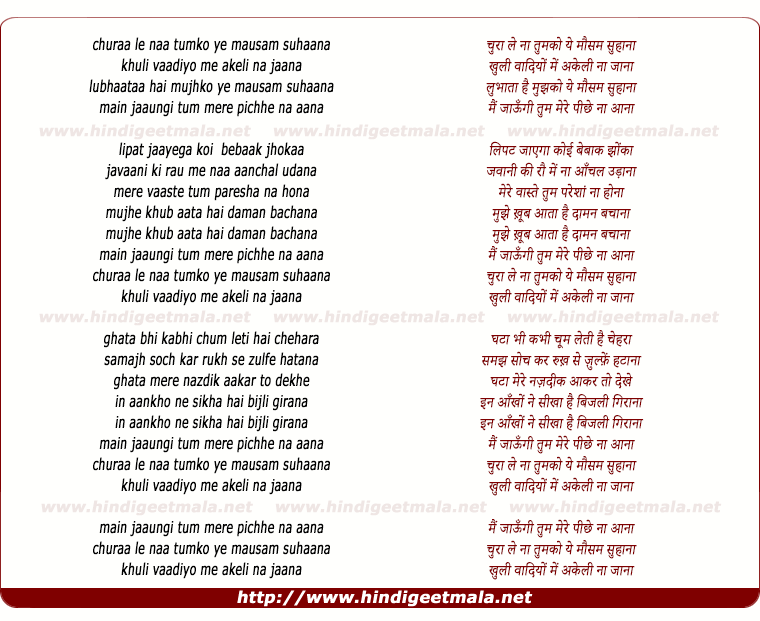 Comments on song "Churaa Le Naa Tumako Ye Mausam Suhaanaa"
RealMusicKing on Friday, July 08, 2011
Hello. This duet also a solo sad version by Suman Kalyanpur "Yunhi Dil Ne Chaha Tha Rona Rulana, Teri Yaad To Bangayee Ek Bahana". Both songs were recorded on the master tape as they were included in the record first released in 1963 but either were never filmed or deleted from the film as a final edit, before releasing it. All lyrics of the film were penned by Sahir Ludhianvi. Regards.
peterklus on Friday, June 18, 2010
Superb duet of Suman-ji and Mukesh-ji. Hard to find video, but it was
supposedly a song that should have been part of the film Dil Hi To Hai with
Raj Kapoor and Nutan. The DVD of the film I have does not contain the song,
I do not know if the original screening of the film in1963 contained this
gorgeous song -- I can only hope it did. Bahut shukriya, ajay sahab.

Hansraj Madan on Tuesday, April 23, 2013
The more I listen to Suman songs the more sad I feel for her. She never got
her dues even though she sang under the baton of all top music directors of
that time..