Video of this song from youtube
Average Rating : 4.48
Total Vote(s) : 27
Please rate this song between 1 star and 5 stars (5 stars being the best). Just move your mouse on the stars above and click as per your rating. Your rating will really help us to improve our website. 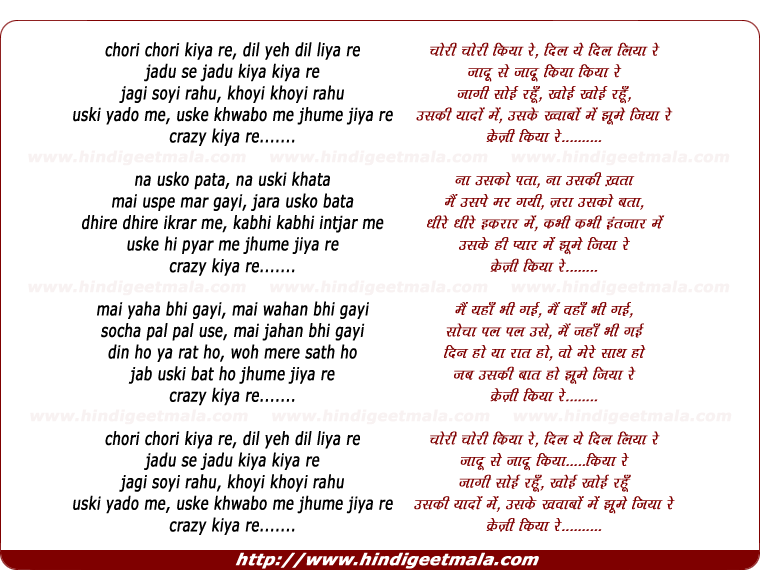 Comments on song "Crazy Kiya Re, Chori Chori Kiya Re"
LilacSreya on Wednesday, June 29, 2011
@LilacSreya Now you really didn't notice that in your username? I thought
you took name that on purpose. :P Well I can get that in 2 clicks, South
Indian films maybe. But Dhoom 2 is Bollywood. And after all, we're
developing, Bollywood has changed since 2006. Suggestion: Try 'Raajneeti'.
Intelligent plot, no unnecessary dance scenes, not even a single cheesy
line, serious acting, normal colors, less action scenes but reasonable.
Complex political thriller, based on a year 400 BCE story!! XD

wwwtotalitaerde on Sunday, February 13, 2011
The Germany problem is misunderstood around the world.The reason for German atrocities and agressiveness is a result of greed and idleness.Racism and the idea of world domination are only an ideological cover for this greed and idleness.This makes it very difficult to deal with the question of Germany, as the German state will always assemble a large part of the Germans with the aim"to make money"using immoral means.My brother had been tortured 5.5 years and was murdered because of our homepage
MartaEzis on Thursday, April 07, 2011
I like Madhuri's, Sridevi's and Vaibhavi's dancing, but I think Aishwariya
also dances very well here. Btw, I had an interesting chat with my father
about this Aishwariya's video. I showed him this video and then also the
same dance by Vaibhavi Merchant, the author of the choreography. He said he
couldn't tell whether they are pretty women because there's so much
unnatural light, he would need to see them in real life. And as far as he
could tell, Vaibhavi's dancing is more interesting.


chilvari on Monday, October 10, 2011
And btw, Aishwarya Rai did appear in an American film. Ever heard of The
Pink Panther? Some of you may think lowly of us Americans but how come all
foreigners want to be apart of our country and culture? You do realize that
America has the highest rate of immigration in the world don't you? Not to
mention, India, Japan, China and alot of other countries get inspiration
from our American stars, like Madonna and Michael Jackson, so they are
Americanized without really being American.

indianchocolate4 on Thursday, December 09, 2010
@Girliemeltem People are really jealous, many women are threatened by other women that are beautiful, even if they themselves are beautiful. It's a competition to be the prettiest (but only among the women that have nothing to offer but their looks) so they come up with any reason at all to attack the other woman and put her down. It's as simple as that, they're really insecure 'cause they know that they won't have their looks forever!
View all 679 comments related to song Crazy Kiya Re, Chori Chori Kiya Re
Popular Links on HindiGeetMala