Video of this song from youtube
Average Rating : 4.59
Total Vote(s) : 1482
Please rate this song between 1 star and 5 stars (5 stars being the best). Just move your mouse on the stars above and click as per your rating. Your rating will really help us to improve our website. 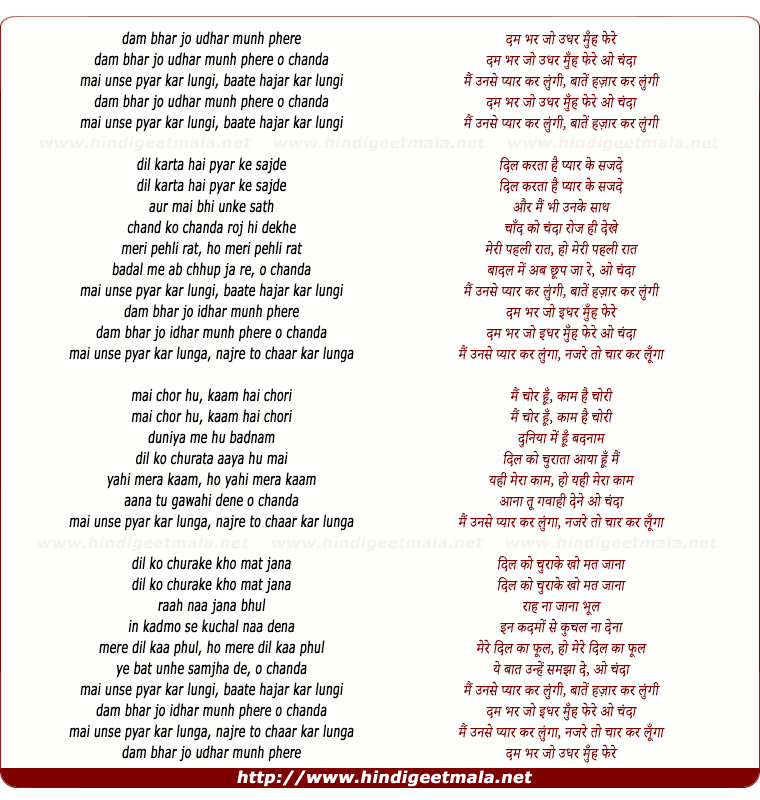 Comments on song "Dam Bhar Jo Udhar Munh Phere"
TheNetRoamer on Tuesday, February 16, 2010
A thing of beauty is a joy for ever: Its loveliness increases; it will
never Pass into nothingness; but still will keep A bower quiet for us, and
a sleep Full of sweet dreams, and health, and quiet breathing. Therefore,
on every morrow, are we wreathing A flowery band to bind us to the earth,
Spite of despondence, of the inhuman dearth Of noble natures, of the gloomy
days, Of all the unhealthy and o'er-darkened ways ***John Keats***

Naushad Shafkat on Tuesday, July 08, 2008
No doubt one of the best ever duets of hindi cinema ! Raj Kapoor was and
will always remain one of the best actors ever - he can not be bettered as
he was so so natural. Nargis was such s favourite that I had my younger
sister named after he even though I was just 4 at the time. Truly a GREAT
couple-a GREAT film and a GREAT song.

jewelmarkess on Tuesday, December 27, 2011
I grew up in Russia and I saw this movie then, as a child, it was one of my
mother's favorite movies too which is why when they showed it in the "old
movies" theater, she took me. It's such a beautiful movie, very emotional.
So many years since I watched it, and I still remember it. Great song. The
actors are just fabulous.

marc hills on Monday, January 19, 2009
In this Nargis Ji sure looks international but the acting reminds of so
many ,Eyes like Sridevi ,Nose is mixture of Kajol plus Rekha and a little
bit of Mumtaz and Madhuri .And some true Nargis Ji expressions which no one
can copy. Wow Nargis Ji was a class apart and surely was and is the
inspiration to many.