Video of this song from youtube
Average Rating : 4.45
Total Vote(s) : 165
Please rate this song between 1 star and 5 stars (5 stars being the best). Just move your mouse on the stars above and click as per your rating. Your rating will really help us to improve our website. 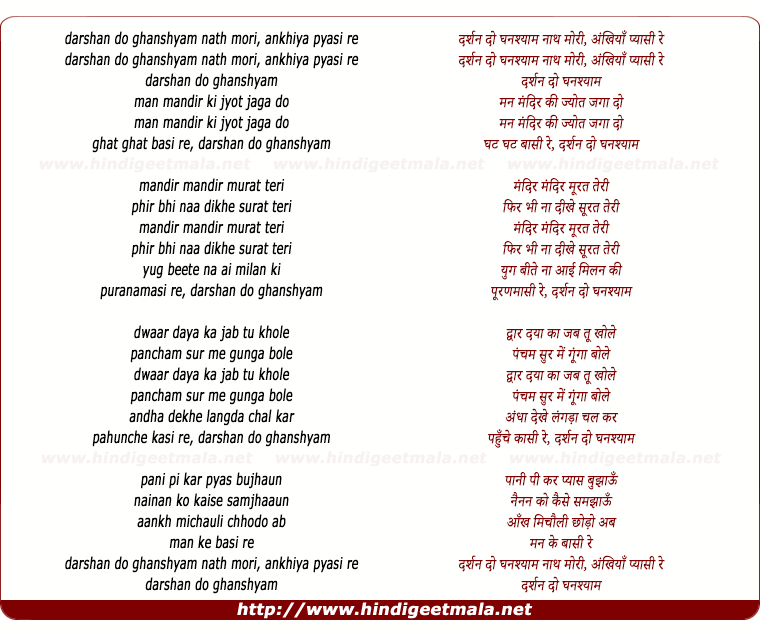 Comments on song "Darashan Do Ghanashyaam Naath Mori Ankhiyaan Pyaasi Re"
rameshpuri1 on Tuesday, January 25, 2011
this song was written by gopal singh nepali a welknown hindi poet ..who also wrote songs for films...please recall the song TERI MERI MULAKAT AADHEE REH GAYEE.for the film GAJRE. music by sachindev burman and singer was suriaya..RG
kd2013 on Monday, September 08, 2008
Hi, the meaning is as follows: Oh Lord Ghanashyama (dark as a raincloud,
ie. Krishna)! Please give Thy vision (as) my eyes are thirsty. Light the
temple of my heart, O Thou who art in every Ghata (literally: pot, here it
means: residing everywhere or Omnipotent). Thy idols are found in every
temple, yet Thy (actual) face is not seen anywhere. Ages have gone by, yet
the full-moon (night) of (our) meeting has not come yet.

kd2013 on Monday, September 08, 2008
When Thou openest the doors of (Thy) Compassion, the dumb sing in the note:
'So' (the loudest of the seven notes), the blind see, and the lame walk all
the way to Kashi (Varanasi)! (I) drink water to slake my (physical) thirst,
but how to explain to my eyes! (how to quench their thirst to see you).
Give up this hide-and-seek now, O dweller of (my or everybody's) heart! O
Lord Ghanashyama! Please give Thy vision.

sonny19xx on Monday, March 02, 2009
A good bhajan. Excellently rendered by Hemant K and Sudha M. Many songs
bhajan and non-bhajan have been inspired by this tune. Like Aap yun hi agar
from Ek musafir.. and hum ko manki shakti from Guddi. Manna dey joins in
the last stanza with good effect. The tune is so simple and powerful.
Ravi's beauty. God, bestow sense and mercy into the hearts of all of
humanity . THANKS malkauns01.

Dilip S. Coulagi on Sunday, September 06, 2009
Kamod also uses both tivra and shuddha ma s. So does Hameer. All three are
very similar, the difference being in the sequence of swaras and the
emphasis on different swaras in ascent and descent.. That's why I thought
an expert should opine on it. One day I'll get an accomplished singer like
Dhanashree Pandit-Rai to give her opinion.