Average Rating : 4.31
Total Vote(s) : 114
Please rate this song between 1 star and 5 stars (5 stars being the best). Just move your mouse on the stars above and click as per your rating. Your rating will really help us to improve our website. 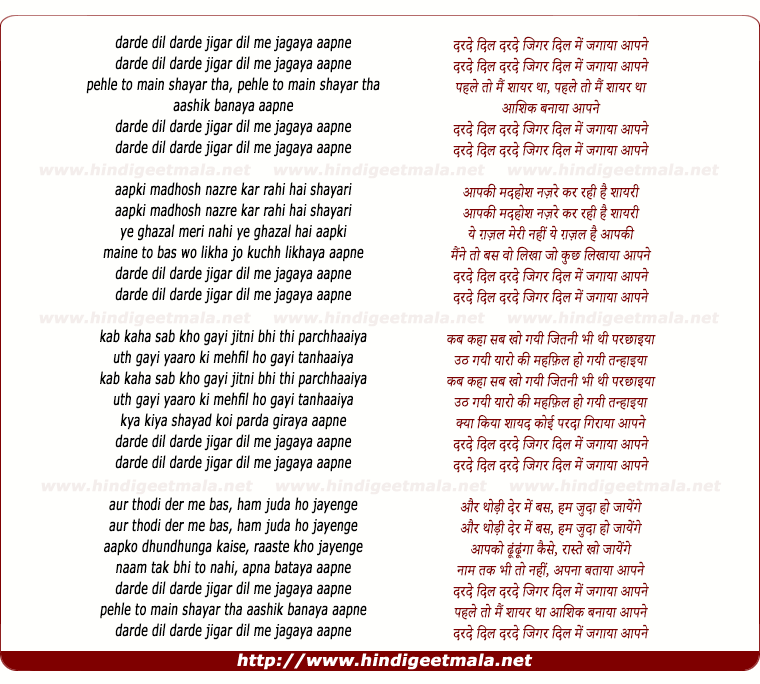 mialvi9 on Sunday, March 01, 2015
Certain songs have such a captivating composition and rendition that you
don't notice the minor flaws in lyrics. I find the mukhda of this song a
little odd. Where else would one induce dard-e-dil other than dil? And
dard-e-jigar in dil? Beats me. Other than this, AB has done a good job. And
whatever little issue the mukhda had, LP's excellent score and Rafi's
mesmerizing singing concealed it. Rishi played it very well on screen. He
was one actor who performed exceptionally well in songs, something that he
was not given enough credit for.﻿

TheGoldenRafi on Saturday, September 11, 2010
His song is superb and Beautifully Sang By Mohd. Rafi and music by
laxmi-pyare. if u divide this song into 4 pieces u wil notice that this
song has 4 Compositons-1st Main composition(Dard-e-Dil...),2nd
Composition(Aap ki madhosh Nazre..).3rd Composition(Kab Kahan..),4th
Composition(Aur thodi dere mein bas...).I dnt think any other bollywood
song has this quality and I lov lov lov dis song only for Mohd. Rafi
Singing And His Great Voice.

kausar anjum on Wednesday, September 08, 2010
this song is like a flow of water which goes smoothly with the lyrics &
music. This song is masterpiece with its ballad music, western style &
superb composition by LP with beautiful line by Bakshi Saab & last but not
the least bueatifully sung by Rafi Saab. Its a Gem in Indian Music
Industry.

Abdul Rahim Hasan on Sunday, June 28, 2015
Rafi proved equal to singing the power-pop of the seventies. Even when in
his fifties, Rafi's supple voice suited a 20-something Rishi Kapoor. As one
of his last few songs, this song unfailingly results in a poignant tug at
one's heartstrings.

It's a fitting valedictory to a glorious era.﻿