Video of this song from youtube
Average Rating : 4.11
Total Vote(s) : 28
Please rate this song between 1 star and 5 stars (5 stars being the best). Just move your mouse on the stars above and click as per your rating. Your rating will really help us to improve our website. 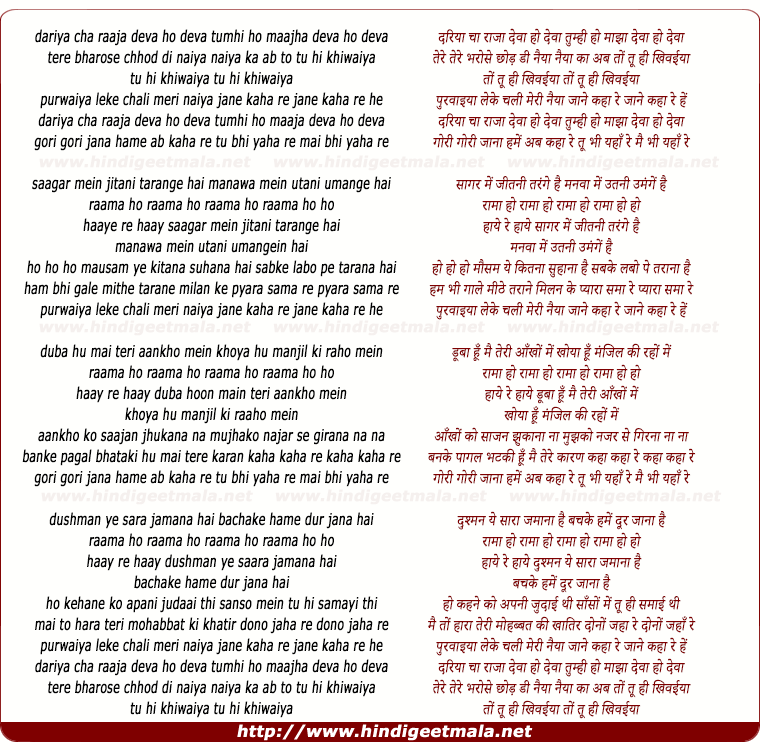 Comments on song "Dariya Cha Raaja Deva Ho Deva"
S H on Thursday, August 19, 2010
@ dbninhouston: The lyrics for the songs in the film were by Ravindra Jain
and hasrat Jaipuri. Not sure who amongst the two had written for this song.
While most of the web sites mention that Ravindra Jain is the Music
Composer for the film, Wikipedia mentions Kalyanji Anandji. May be, RJ is
the correct one. Shailendra Singh & Lata sang the song while SS acted in
the song/movie too. Is the lady Bhavana Bhatt in the song? HSRS

Anant Wadhokar on Friday, November 12, 2010
Indeed it is Ravindra Jain! I have been a fan of his music since my
childhood. I love his music in all Rajshri production movies and his work
with Raj Kapoor. Raj Kapur decided to work with Ravindra Jain after
listening to Geet Gata Chal's Shyam Teri Bansi..

S H on Wednesday, May 12, 2010
A song I have been trying for the past few years. All I knew abt it was
that Shailendra acted and sung the song. Nothing beyond that. 2 days back i
succeeded in seeing the video as well as downloading. Great song even
after nearly 40 years. HSRS

soloMarathiguy on Wednesday, March 24, 2010
Watched this film a long time back. Was still at school and this song
brings nostalgia. I even copied this song in writing. The actress name is
Bhavna Bhatt and actor is Sailendra (famous singer at a specific period)