Average Rating : 4.53
Total Vote(s) : 51
Please rate this song between 1 star and 5 stars (5 stars being the best). Just move your mouse on the stars above and click as per your rating. Your rating will really help us to improve our website. 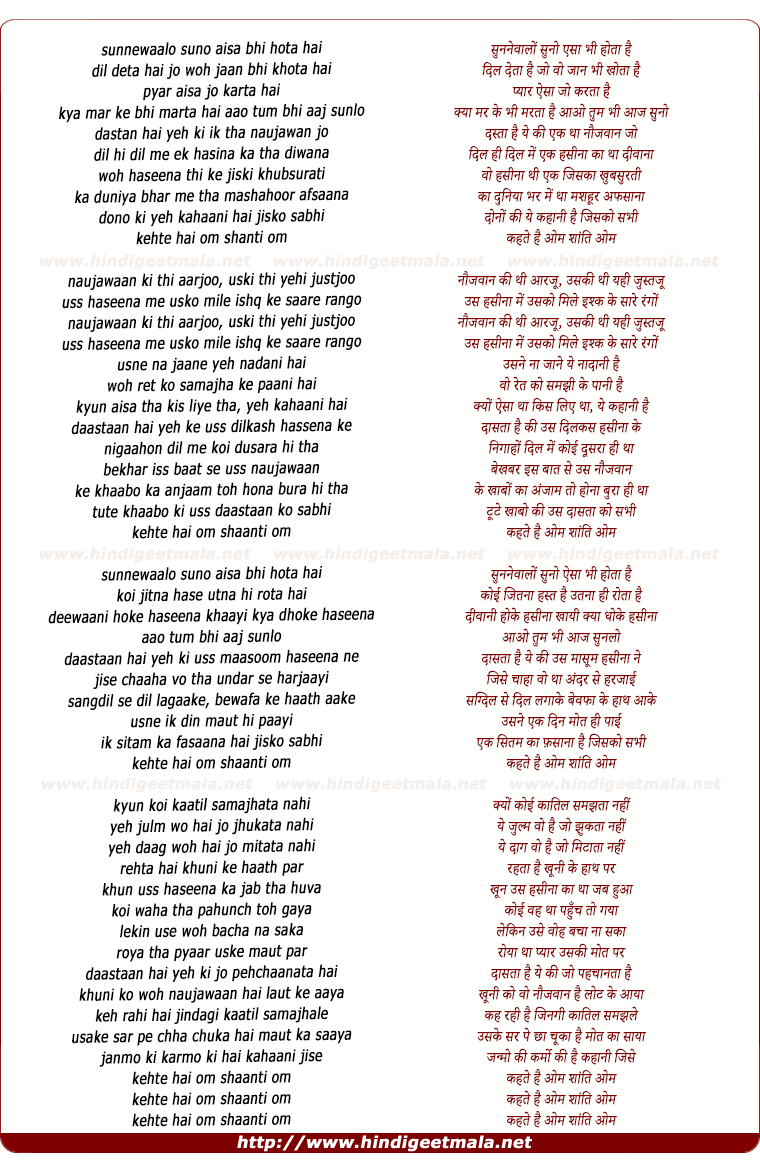 Comments on song "Dastaan-E-Om Shanti Om"
MileniumHeartz on Tuesday, September 17, 2013
Hes singing a tail called "Om Shanti Om", And its about the guy who's
singing, "Before life", so it actually happened, Om ( the guy thats singing
) Was really in love with a girl and her acting skills, They both befriend
each other and Om falls deeper and deeper in love, but then om finds out
shes engaged to the grey haired guy, but the grey haired guy murders her,
and om tried to save her but failed, and om dies and is reborn into after
life and Om is now a demanding actor, ( to be continued )

MileniumHeartz on Tuesday, September 17, 2013
so now that Om is a demanding actor his friend who is now old tries to
remind him, about his before life and so does his mom, When he figures it
out he tries to avenge the girls death, by getting him to confess he killed
the famous actress, And then shanti's ( the girl ) after life being, comes
in and doesnt remember anything at all, so he gets her to act as a ghost,to
scare the grey haired guy. FOR MORE WATCH THE MOVIE ITS AWESOME

Lakshi Gunawardena on Tuesday, August 30, 2011
A YourMumInHd ,and @KingKhan HD ,I agree with both of u ,@KingKhan ,your
subs r wrong ,but u did your best ,and u were only a little off,and I
thinkg u did a better job than I could've done.@YourMumInHD,So what if her
subs were wrong? She did her best ,and why don't u try translating it
better than her. It's her own translation.And anyways,she wasn only a
little off.K? Bye.

Vich1111 on Sunday, May 15, 2011
thanks for uploading the good quality clip, but I think the subtitles are
not that great, missing a lot of info, nice try though. The subtitles for
this song are better @farinn000 . Too bad it doesnt have the same quality
of yours.

Aeslinn Tay on Wednesday, June 15, 2011
@frendzfamirlife seriously? I thought Sandy went and hid there, coz
Shanti's soul/spirit/ghost doesn't appear until at the end to get her
revenge on Mukesh Mehra. =p But if it really IS Shanti, thx for the
eye-opener!