Video of this song from youtube
Average Rating : 3.95
Total Vote(s) : 39
Please rate this song between 1 star and 5 stars (5 stars being the best). Just move your mouse on the stars above and click as per your rating. Your rating will really help us to improve our website. 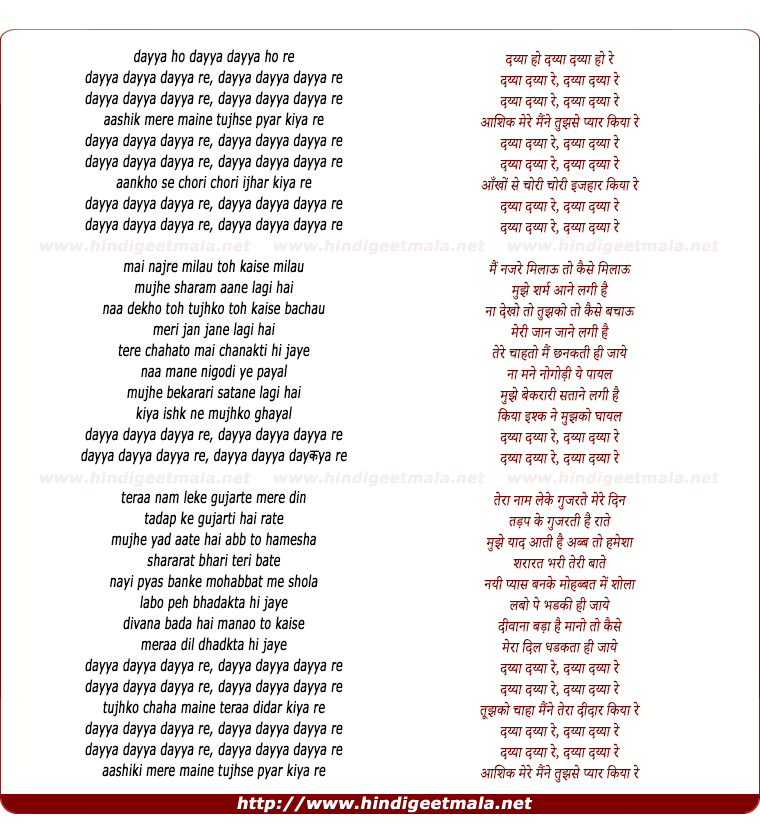 Comments on song "Daiya Daiya Daiya Re"
desigirl1011 on Sunday, April 21, 2013
I have no opinion on this really, but the argument I've heard for why
actors and actresses shouldn't do this because they're not just regular
people, they're role models. And when all the indian actors and actresses
are doing everything they can to look as caucasian as possilbe (skin
lightening, colored contacts, etc) what kind of message are they sending to
kids? that being brown is bad? try to look white? And yeah its an unfair
standard for actors, but its a responsibility that comes w the job

Jaseeka Rawr on Friday, August 03, 2012
On most videos it's the same sad loser using different names. It's
extremely creepy & worrisome. This person spends ALL their time on ALL her
videos year after year(I'm serious..) bashing her on a daily basis. They're
obsessed, angry & it's scary. They do need help. There are some
creepolas(my mom's word..lol) out there! Also, there are many other people
who are just all around sad & jealous who take the time to hate. Hate only
breaks you down, the effort could be spent helping & loving others!

globalcitizenn on Sunday, August 19, 2012
yes... its so creepy, its scary...i think someone should investigate who
these people are and they should have cyber laws against stalking,
bullying,harrassment,slander and defamation when it goes to such an extreme
like these guys.. no wonder ash does not come online and is so
private...she has to protect herself from psychos like these...i'm sure
they would say the the same thing about her daughter as well thats why ash
doesnt feel safe sharing her pictures with the world. I feel sad for her.

Jaseeka Rawr on Sunday, August 19, 2012
Yes, very true. The main guy w/different screennames(I can tell because he
repeats the same nonsense using diff. names & even agrees with himself &
gives himself thumbs up..creeeepy!) He's upset because she "left" Salman
Khan and I think, because he's got no chance & never will of being able to
talk to her or touch her. She's definitely earned her reputation of being
extremely beautiful & talented. Her acting in Hum dil chuke sanam & Devdas
proves her acting abilities loud & clear!(continued)

Abhishek Rane on Saturday, November 07, 2015
nice song aish looking awesome.. but this is live stage show.( Isha kopikar
and arjun rampal are watching this entire performance are in same
constume)how can Aishwariya changed so many constumes in single song an
even stage background changes.﻿