Video of this song from youtube
Average Rating : 4.41
Total Vote(s) : 123
Please rate this song between 1 star and 5 stars (5 stars being the best). Just move your mouse on the stars above and click as per your rating. Your rating will really help us to improve our website. 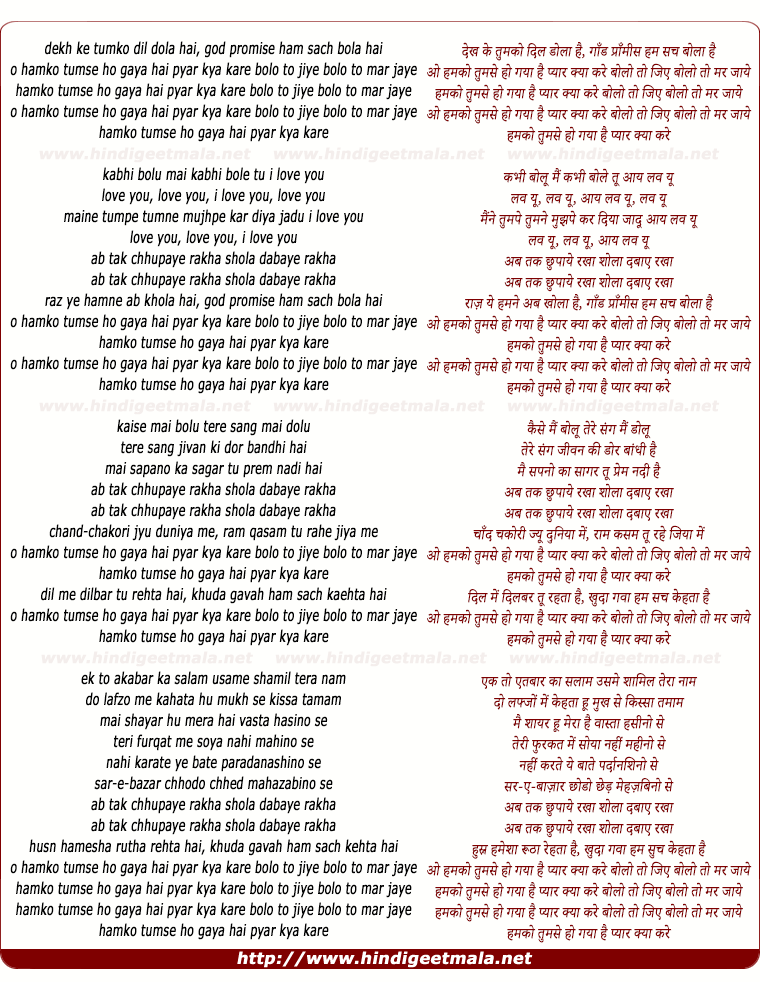 Comments on song "O Humko Tumse Ho Gaya Hai Pyaar"
tusharmane on Sunday, January 09, 2011
This is gem of Indian film history. A film of Manmohan Desai which has a
very very high entertainment value. See it for 1000 times and still won't
get bored. I remember it from before its release the advertisement came in
the newspaper for the advance booking and I was 5-6 years old and I said to
my uncle I wanted to see this movie. Since then I have seen this film
several times but never feel bored. Also to let the music lovers know that
this song has voices of Kishor, Mukesh, Rafi and Lata.

Jason Jasonn on Wednesday, August 08, 2012
The problem is Indian modern movies are not worth watching, they are
teenage material and not even considered movies. Also there's no good young
actor, in the 70s there was Darmender, Shashi Kapoor, Rajesh khanna, bachan
etc. You can't find young actors like those today. Shah Rukhan came in the
90s with something new but now he's old and finished. Sunny Deol the king
of actors made good movies in 90s but now he's gone. The old movies and
songs were gold. Today what they have is not even con

john cena on Saturday, February 07, 2009
One of the greatest films of all-time!! I love this movie so much, and I
love it for the one simple reason and that reason is on the
screen...Amitabh Bachchan!! Man, the 70's had some of the most all-time
beautiful films ever made!! Fantastic Movies, Fantastic Moments, and
Fabulous Acting Performances.today's kind of films are ABOLSUTELY
NOTHING AND NOWHERE to the Greatness of the 70's...thanks for posting
this!! Sanjeev Sharma Dallas, Texas