Average Rating : 3.00
Total Vote(s) : 2
Please rate this song between 1 star and 5 stars (5 stars being the best). Just move your mouse on the stars above and click as per your rating. Your rating will really help us to improve our website. 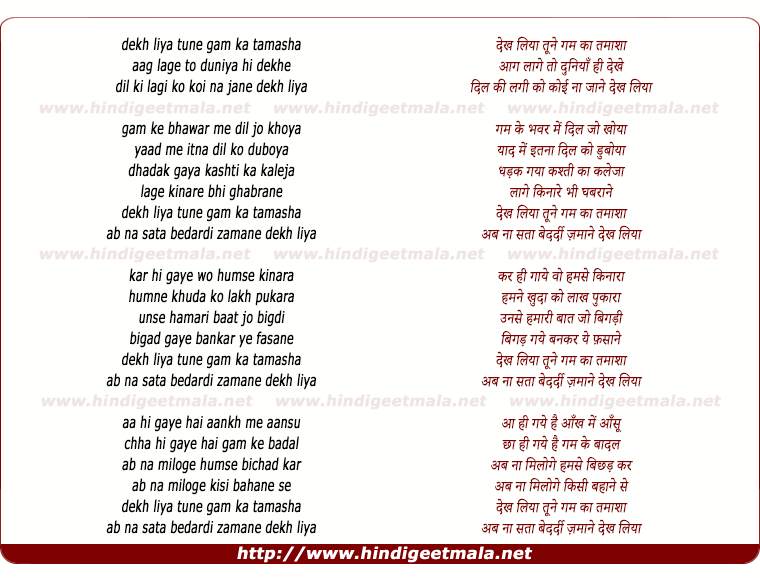 Comments on song "Dekh Liya Tune Gham Ka Tamasha"
chandrashekharjain on Sunday, July 18, 2010
Pandit Shiv Dayal Batish has been a stalwart on the Indian music scene
since 1936. His songs have been broadcast from All India Radio
nationwide.In 1970 he moved to California, USA to teach music at the
University of California, Santa Cruz.He and his son Shri Ashwin Batish,
also formed the Batish Institute of Indian music and Fine Arts - an
educational Institute to teach Panditji's music and to further the cause of
Indian music and culture in the Monterey Bay

Riaz Ali on Friday, December 24, 2010
Reaching to the zenith of fame is not an easy task. These legends had
devoted their lives to a cause and finally achieved it. Kitna dard hai es
geet me phir bhi maza deta hai keh sunta rahon.. A rarest upload. Thanks so
much.

ragmala on Tuesday, July 13, 2010
Thank you so much for uploading this beautiful song by my father!
Ajay Yuvraj on Friday, June 25, 2010
Beautifull rare song by SD Batish, thanks for sharing.
Moid Hasan on Thursday, March 17, 2011
Kudos goes to MM VIDEO for releasing this rarest gem.
View all 7 comments related to song Dekh Liya Tune Gham Ka Tamasha
Popular Links on HindiGeetMala