Video of this song from youtube
Average Rating : 4.68
Total Vote(s) : 22
Please rate this song between 1 star and 5 stars (5 stars being the best). Just move your mouse on the stars above and click as per your rating. Your rating will really help us to improve our website. 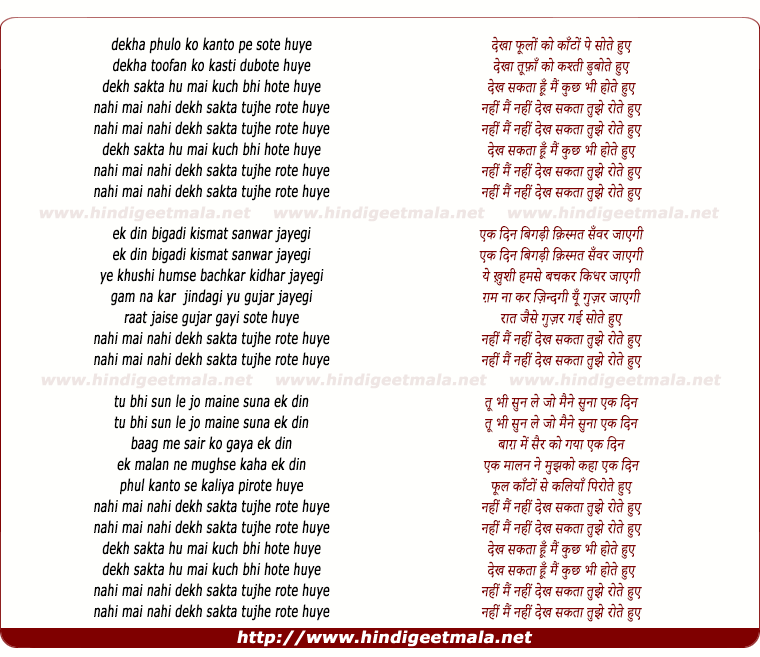 Comments on song "Dekha Phulo Ko Kanto Pe Sote Huye"
Sushama.Narayan. Somji on Thursday, March 27, 2014
Wish to hear such words at some time in life said by a brother whoyou love
more then yourself . But God bless my own brother as well as Rakhi
brothers,﻿

zuluallan on Friday, November 22, 2013
This is the first movie I watched on bada parda on the street with my elder
brother on the occassion of Ganesh Chaturthi. People were crazy to see Big
B's movie, the street was fully crowded, it was very hard to get a place to
sit. I was less than 10 year old. My bro took Parle Poppins for me. Still I
remember the taste. This movie always refresh my childhood days... ﻿

mukesh sharma on Saturday, May 25, 2013
Surayia sarwar shes gr8 artist fareda jalal...remember mother of
sharukhkhan in kuch kuch hota hai,and kajol in ddlj and many mor.she was
so cute in her childhood